Unlikely to give votes, should BJP field him. 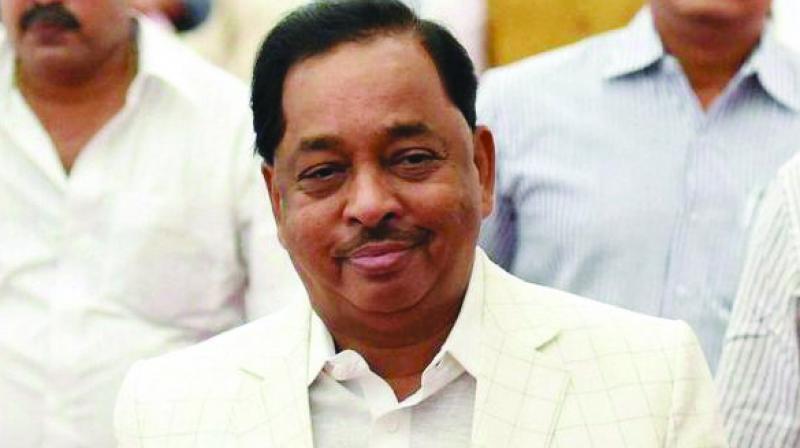 Mumbai: The Shiv Sena will not give additional votes to Maharashtra Swabhiman Paksh president and former chief minister Narayan Rane if the Bharatiya Janata Party (BJP) decides to field him in the Rajya Sabha elections to be held on March 23.

The BJP will need at least seven more votes from non-BJP members to ensure its victory, said sources. In such a scenario, it may be risky for the BJP to field Mr Rane for the Rajya Sabha if elections take place. But Mr Rane may prefer a backdoor entry into Parliament, instead of contesting Lok Sabha polls against Sena MP Vinayak Raut from Ratnagiri-Sindhudurg constituency, told party sources.

After quitting the Congress, Mr Rane is yet to get any break from the BJP despite waiting for a long time. He is very eager make an entry into the state cabinet, a move which has been kept on hold by chief minister Devendra Fadnavis.

The CM and senior ministers from his cabinet are not in favour of Mr Rane’s entering the cabinet. Hence, Mr Rane was denied a ticket for the legislative council due to opposition from the Sena and other parties.

Mr Rane met BJP president Amit Shah in the presence of CM Fadnavis and Mumbai BJP chief Ashish Shelar in New Delhi recently.     He is claiming that the BJP has given him offer to contest the Rajya Sabha elections and he will consider it.

Sorces in the BJP said, “The BJP want to field  Mr Rane from Ratnagiri-Sindhudurg Lok Sabha constituency, where Sena is powerful. Rane tried to enter the state cabinet, but his efforts were futile. Rane and his son Nilesh had lost elections and he knows that it will not be easy to win in Lok Sabha elections next year.

The BJP is likely to offer him one seat in Parliament and one in the assembly for his son Mr Nitesh. The BJP has cleared that Rane will not get three seats for his family members.”

BJP has offered the Rajyasabha seat to Rane to prevent his entry in the state cabinet. CM Fadnavis does not want to accommodate him in the cabinet. Now Mr Rane has to decide whether he want to work in the state politics or in Delhi and he has to think for his son Nilesh who want to contest Loksabha from Ratnagiri-Sindhudurgh to defeat Shivsena MP Vinayak Raut, told BJP leader.