Chemical colours used during Holi have constituents like lead, benzene and various aromatic compounds that lead to dry and damaged skin. 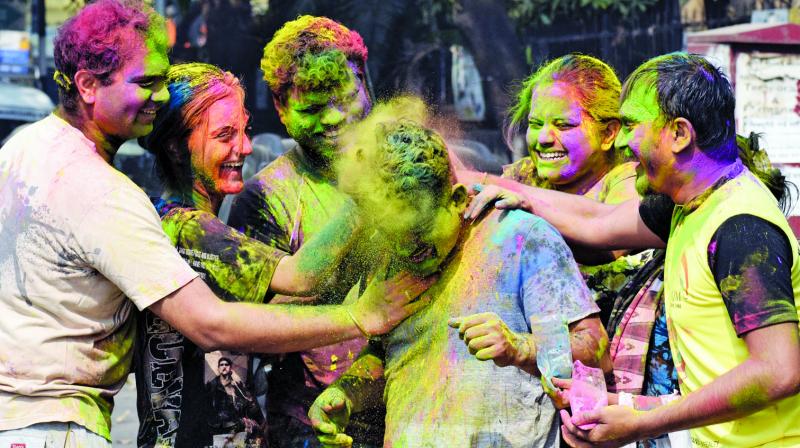 Mumbai: On Friday, when the city celebrated Holi and Rang Panchami, civic-run hospitals received 20 cases of intoxication due to ‘bhang’ (an drinkable preparation of cannabis) and 12 cases of eye irritation caused by chemicals used in colours for basic treatment. The number of bhang intoxication cases, however, was drastically less than last year’s figure — 48 D. Avinash Supe, director of major civic-run hospitals said “Around 32 patients had Holi-related injuries. Only one was admitted a road traffic accident victim who was under the influence of bhang.”

The Mumbai police’s anti-narcotics cell arrested three persons, including an Ivory Coast national, in two separate drugs case. The ANC officials seized 63 gram mephedrone worth Rs 9.26 lakh and from two of them. A separate case of ecstasy possession was also registered in which an African was arrested with 12-gram ecstasy worth Rs 84,000. The ANC had stepped up vigilance ahead of Holi to curb peddling narcotics substances in city. During the course of surveillance, the Azad Maidan unit of ANC received information that two persons would come to Reay Road area on Wednesday night to peddle Mephedrone. “A team of ANC laid a trap at the spot near Eastern Free Way at Wadi Bunder and arrested the duo. When they were frisked we found 63 gram mephedrone worth Rs 1.26 lakh from them. They were in a taxi that has also been seized in the case," said an ANC officer. A case has been registered against them under the Narcotic Drugs and Psychotropic Substances Act .

Chemical colours used during Holi have constituents like lead, benzene and various aromatic compounds that lead to dry and damaged skin.