According to sources, Mr Pawar told Mr Gandhi that the alliance should be declared as soon as possible. 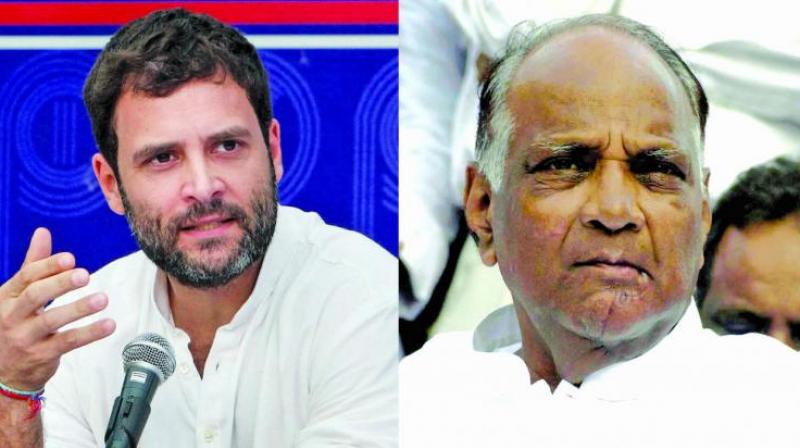 Mumbai: In the wake of their party chiefs meeting in New Delhi, leaders of the Congress and Nationalist Congress Party (NCP) will meet on February 6 to initiate alliance talks. Succumbing to pressure of workers and MLAs of both parties to form an alliance at the earliest, the Congress and NCP’s senior leaders from the state unit will meet in Mumbai and chart out the alliance plan.

State leaders from both parties received messages from their respective high commands in New Delhi to initiate a talk for an alliance as early as possible. According to the instructions, Congress state chief Ashok Chavan and NCP state chief Sunil Tatkare decided to meet in Mumbai on Tuesday. This development comes after NCP chief Sharad Pawar and Congress president Rahul Gandhi met in New Delhi.

According to sources, Mr Pawar told Mr Gandhi that the alliance should be declared as soon as possible. There was public demand for an alliance between Congress and NCP MLAs after the Gujarat Assembly elections results were out. Sources said Mr Pawar pointed out this to Mr Gandhi.

“To defeat communal forces, workers have been strongly demanding that an alliance be built between like-minded parties. For starters, NCP and Congress will sit together. We will let you know about the details of the meeting afterwards,” said Mr Nawab Malik, NCP spokesperson.

Congress and NCP were allies in the state government for 15 years and in the Centre for 10. But in 2014 Assembly elections, alliance was broken over the details of seat sharing. Now as both have decided to initiate talks, seat sharing will be the key issue before them.