Tuesday against his arrest and judicial custody in an alleged money-laundering case, demanding his release on bail. 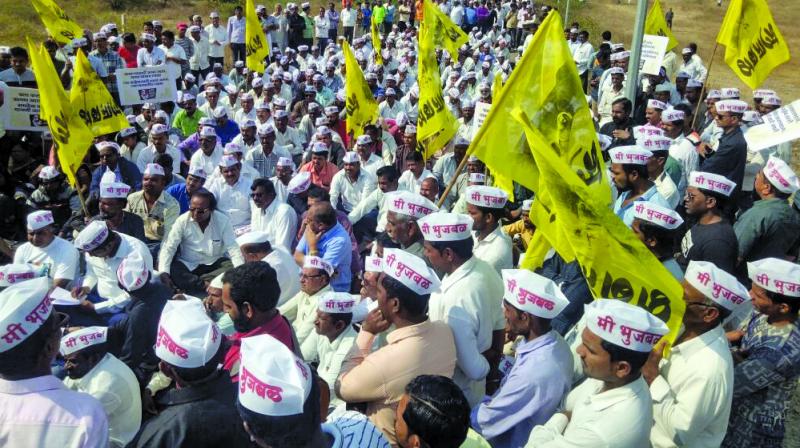 Several Chhagan Bhujbal supporters from Nashik demanded the release of Bhujbal from jail.

Nashik: Supporters of incarcerated former state deputy chief minister Chhagan Bhujbal, who is also a sitting MLA, staged protests in Maharashtra and in Madhya Pradesh on

Tuesday against his arrest and judicial custody in an alleged money-laundering case, demanding his release on bail.

The demonstrations that began at 11 am saw protestors raising slogans while wearing a cap that had the words ‘Mi Bhujbal’ (I am Bhujbal) printed over it.

In Nashik, thousands of supporters were led by a senior NCP office bearer Nana Mahale, NCP district chief Adv Ravindra Pagar, corporators Gajanan Shelar, NCP Mahila wing chief Prerna Balkwade and others to the Collector’s office, where a memorandum was given for the state chief minister.

Samta Parishad executive president Krishnakant Kudale said that though Chhagan Bhujbal and his nephew, former MP Samir Bhujbal had been taken into custody by the Enforcement Directorate (ED) in a money laundering case, “So far no charges have been proven against them and yet the government agencies were keeping them in the custody under the flimsy reason of interrogation.”

“The Supreme Court has recently ruled that Sec 45 of the Money Laundering Act was unconstitutional. As this section has been struck down, the accused has full right to seek bail and the court cannot deny it. This is a nefarious design by the government to stifle the voice of the deprived sections,” he further alleged.

The Samta Parishad and other organisations are holding meetings throughout India, to garner support for seeking  Bhujbal’s release.