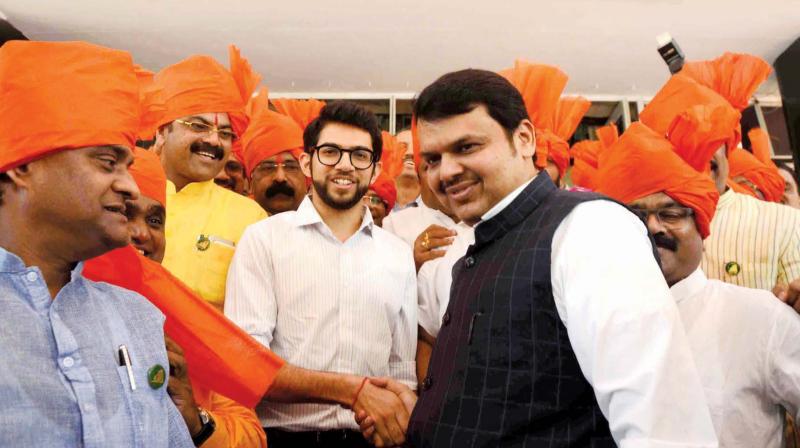 Mumbai: The Shiv Sena has echoed a sentiment voiced by the Congress and Nationalist Congress Party (NCP): that its ally the BJP should not claim credit for Maratha reservation.

Shiv Sena on Saturday said that political mileage should not be sought over Maratha reservation, and the community should be given it with respect. All political parties are of the opinion that the issue could be a political game changer in the next year’s elections in Maharashtra as Marathas are one of the most dominant communities in the state. The BJP has put up posters in several parts of the state giving credit to its leaders.

The Shiv Sena in an editorial in its mouthpiece Saamana said the financial status of the Maratha community was poor hence it had been provided reservation. Now, many other communities, including Dhangars, are also standing in a similar queue. Those who are taking credit for Maratha reservation and wearing turbans (a reference to the BJP) should not forget this.

Praising the chief minister for his tactful handling of the issue, the Sena said that Mr Fadnavis handled the matter with patience and that all political elements were taken into confidence before providing reservation to Marathas. The most important thing is that reservation has been given without touching the OBC’s reservation, it observed.

The party had also warned the government at the beginning that it should not cheat the community by making a hallow Act with an eye on the general elections. The Maratha community should be given the reservation with the dignity and respect, the editorial read.

Meanwhile, Shiv Sena leader Diwakar Raote, who is the state transport minister, Saturday announced that one person from the family of those who died during the Maratha quota protests earlier this year would get a job in the Maharashtra State Road Transport Corporation (MSRTC).

Mr Raote said, “Chief minister Devendra Fadnavis and Shiv Sena president Uddhav Thackeray had assured that all possible help would be extended to the families of those who lost their lives in the quota stir.”