Long queues outside ATMs returned in the last two days as people rushed to withdraw money following payment of salaries. 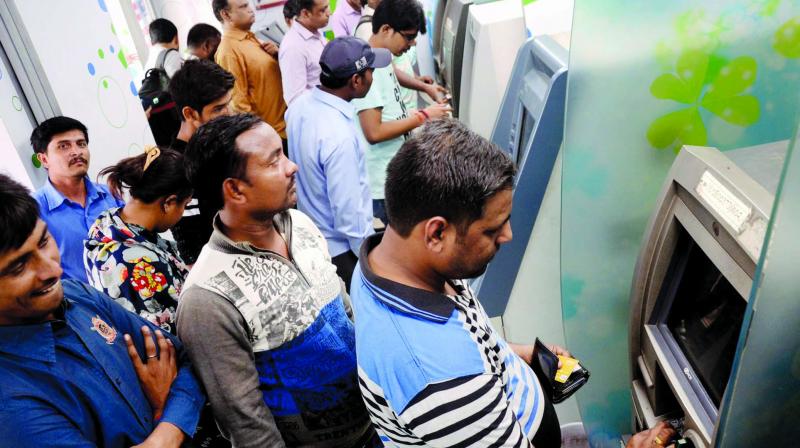 Mumbai: Long queues outside ATMs returned in the last two days as people rushed to withdraw money following payment of salaries. While people at many places complained that there was no cash in the ATMs, the Reserve Bank of India (RBI) spokesperson did not reveal if they had a special contingency plan for banks in the wake of the renewed rush outside ATMs.

Amit Sharma, who works with an IT firm, said, “I earn around Rs 40,000 and at the beginning of the month, I am supposed to pay my EMIs, pitch in money for monthly expenses at home, and give some money to my parents. But the problem is there is a restriction on withdrawal due to which I am unable to withdraw money for the goods and services for which I have to pay in cash.”

D.K. Jain, branch manager, Central Bank of India, Wadala branch, said, “A few central government employees have been paid their salaries in advance so that they can withdraw money in advance. However, there is no specific communication from the RBI when it comes to preparing ATMs for pay day.”

“The problem has become intense with people getting salaries and being unable to withdraw more than Rs 24,000,” said Mr Jain.

Alpana Kilawala, spokesperson, RBI, said, “Whatever decisions or notifications we come out with are in the public domain and uploaded on our website.” However, till Thursday evening, there was no direction uploaded on the RBI website announcing any special contingency plan ahead of pay day. Meanwhile, the Centre is learnt to have scaled up printing of Rs 500 notes to ensure that the new stock of currency will ease the situation in a few days.