It will happen by end of March 2017, distributes point-of-sale machines, says Mungantiwar . 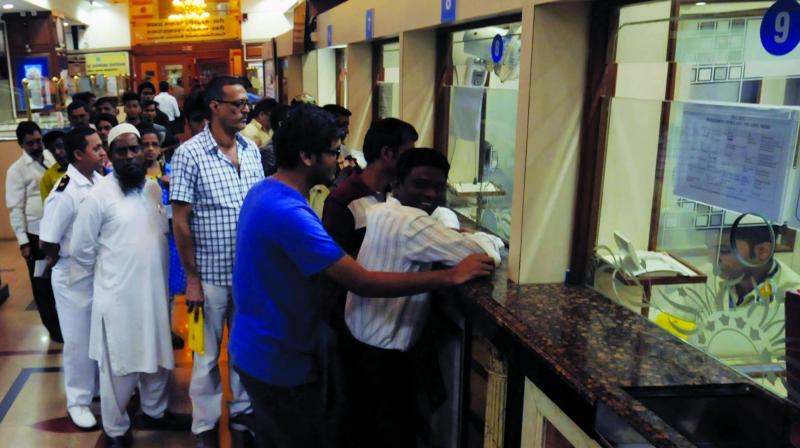 People wait in a queue to withdraw cash at a bank in Fort. (Photo: Debasish Dey)

Mumbai: To counter the chaos caused by demonetisation, Dhasai, a small village in Thane district about 80km from Mumbai, has become the first cashless village in the state. Finance minister Sudhir Mungantiwar said that Maharashtra would be transformed into the first cashless state in the country by end of March 2017.

As part of this initiative, Mr Mungantiwar on Thursday distributed more than 150 point-of-sale (PoS) machines to small traders, including vada-paav, paan and grocery vendors in Dhasai.

According to Swapnil Patkar, president of the traders’ association of Dhasai, the population of Dhasai is around 5,000 and on an average, the number of families is about 1,000. “As Dhasai has a market place, more than 25 surrounding villages and villagers are dependent upon Dhasai for their day-to-day needs. There are clothes, grocery, mobile, stationery, seeds and pesticides shops among others,” said Mr Patkar.

The great grandson of Swatantryaveer Vinayak Damodar Savarkar and working president of Savarkar Pratishthan, Ranjeet Savarkar told The Asian Age, “I met Navtej Singh, general manager (Greater Mumbai zone) of Bank of Baroda and convinced him to provide PoS machines to traders to ensure people get relief from shortage of liquidity.” “We held a joint meeting of traders and bank officials on November 26. On the same day, we provided 35 PoS machines.

Mr Mungantiwar has kicked-off this initiative from a small village and we have faith it will become a role model for the nation,” he said. “Each and every family has at least one debit or ATM card with them. As most of the villagers produce vegetables and rice, the number of farm labourers is very less but even they have bank accounts to receive their wages and grants from various government schemes,” he said.

Mr Mungantiwar said, “The state Cabinet chaired by chief minister Devendra Fadnavis has discussed the roadmap to transform Maharashtra into a cashless state. We will be the first to achieve it.”