Fadnavis said that while BJP and Shiv Sena are talking only about development, the other party is busy brandishing guns at each other. 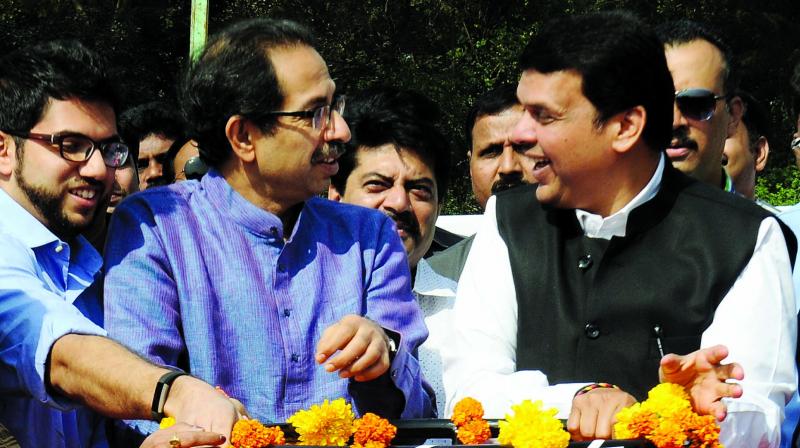 Mumbai: Chief minister Devendra Fadnavis on Thursday took a dig at Nationalist Congress Party over its intra-party troubles where former Member of Parliament Sanjay Dina Patil had allegedly brandished a pistol at his own party spokesperson Nawab Malik. Mr Fadnavis said that while BJP and Shiv Sena are talking only about development, the other party is busy brandishing guns at each other.

Mr Fadnavis made the comments when he shared the dais with Shiv Sena chief Uddhav Thackeray at the dedication of Gundwali-Kapurbavdi-Bhandup complex underground water tunnel. Targeting the NCP without naming it, Mr Fadnavis referred to the recent incident in NCP’s meeting and termed it “goondagiri.”

Recently, in a public meeting of NCP spokesperson Nawab Malik in Bhandup, former NCP MP Sanjay Dina Patil, allegedly accompanied by goons, climbed atop the stage brandishing pistols. Mr Malik claimed that Mr Patil fired in the air. The police is investigating the matter and six persons have been arrested in connection with the incident so far.

Agreeing with Mr Thackeray’s statement about the need for development in Brihanmumbai Municipal Corporation (BMC), Mr Fadnavis said the BJP-Shiv Sena alliance’s focus is very clear. On the contrary, the other party is busy in brandishing guns at each other, he said. Mr Thackeray said the Sena-BJP alliance has been in power in BMC for 20 years “and the people of Mumbai have faith in us.”

Mr Fadnavis also extended his congratulation for completing 15.1 km underground tunnel below 100 metre of land with waterflowing capacity of 4,000 million litres. “This is a visionary step by BMC and this will ensure uninterrupted water supply to Mumbai city for next 100 years and will be remembered for ages,” the CM said. He added, “We are proud that Mumbai is an international city and we are committed to provide each and every facility to this city to keep its glory.”

“We are of the opinion that we have to do lot more first for water, sanitation, solid and liquid waste management, transport and make every system environment friendly to make cities sustainable,” Mr Fadnavis said.