The school said the Maharashtra education department has verbally informed its authorities about the same. 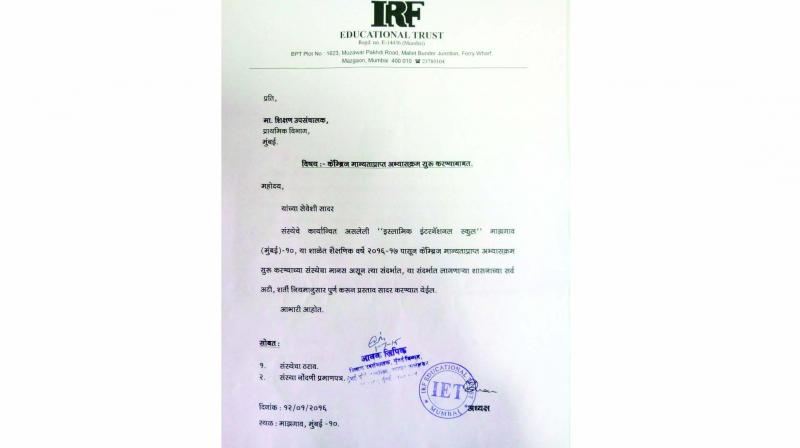 The NOC the school had applied for.

Mumbai: The Mazgaon-based Islamic International School, owned and run by controversial televangelist Dr Zakir Naik’s NGO Islamic Research Fund (IRF), has alleged it has been informed that it will be shut down for not having the State’s No Objection Certificate (NOC).

The school said the Maharashtra education department has verbally informed its authorities about the same. The school authorities, however, claimed that the school had applied for an NOC in January, whose cognisance was taken of by the department six months later in July.

Despite repeated attempts — via calls and text messages — made by The Asian Age, the department remained unavailable for a response.

“In January this year, we wrote to the department asking them to issue an NOC under the new regulations. In July, after following up with them, we received a reply that the application had been received by the department,” said Mr Qureshi. He explained that this was the second application made by the school. “Earlier in 2011, we had applied to the department for an NOC but despite repeatedly following up with them, received no reply. Then in 2014, they asked the school to reapply since the regulations had now changed. After meetings with the board, the school reapplied in January 2016, which is still stuck in the department,” he said.

Mr Qureshi further added that when the education department officials visited, they held a meeting with all the parents. “The officials met the parents and told them to get their children admitted to other schools since the school would soon shut down. The parents argued and called the move unfair to the children and asked them to wait till the academic year had ended. But their pleas fell on deaf ears,” said Mr Qureshi.

The school’s Parent Teachers Association on Wednesday wrote to education minister Vinod Tawde. “We reminded him that he had promised us to not shut down the school in the middle of an academic year but despite his reassurance the school was under threat,” said Hussain Malik, the father of a student.