The accident took place after the trailer carrying the girder got separated from the puller. 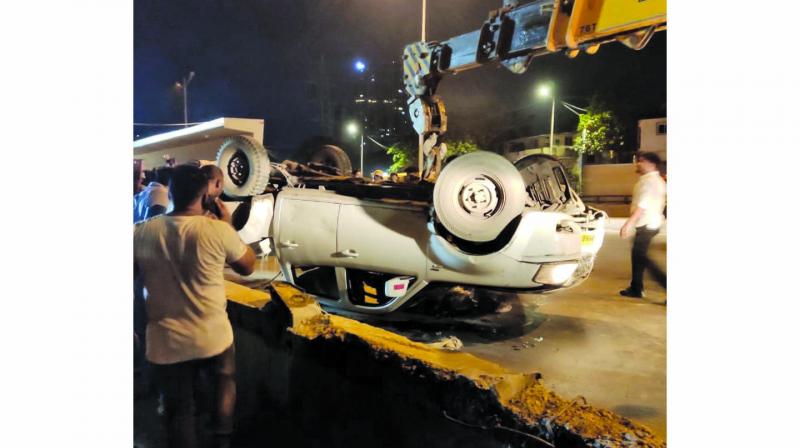 The car involved in the accident.

Mumbai: A driver was crushed to death after a 100 tonne girder came crashing on his car at Kandivali in the early hours of Friday.  The accident took place after the trailer carrying the girder for the construction of metro line 2A got separated from the puller.

The deceased, identified as Arshad Shaikh (25), who was employed with J. Kumar Company that was transporting the girder which killed him, the police said.

Mr Shaikh was in the escort car behind the trailer carrying the girder when the accident took place at around 3am, the Samata Nagar police said.

The escort was to proceed to Dahisar when the accident took place on the Western Express Highway in Kandivali.

The police said that two other occupants in the car jumped out of the vehicle and survived with minor injuries.

“The trailer that was carrying the U-girder got separated from the puller after a rock joining pin broke following which the girder fell on the escorting warning vehicle,” said Dilip Kawathkar, MMRDA spokesperson.

“The incident is unfortunate and unforgivable. There will surely be an inquiry and if anyone is found guilty, he or she  will be punished. We will make sure the contractor provides compensation to the family of the deceased,” said Mr Kawathkar.

An officer of Samata Nagar police station said, “We will probe into the negligence that led to the accident and death of the driver.”

The police has filed a case under section 304 (A) (death due to negligence) of the Indian Penal Code against the trailer driver and further investigation is underway.