Five drown in well in Kalyan 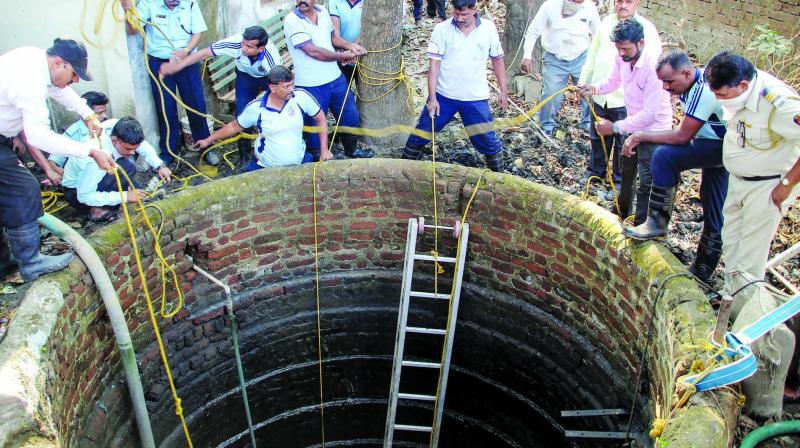 Rescue work being carried out after five people drowned in a well at Kalyan in Mumbai on Thursday. (Photo: PTI)

Mumbai: In a tragic accident, in Netivali village in Kalyan, five persons including two firemen drowned in a well after inhaling some toxic gas while it was being cleaned on Thursday.

According to sources, at around 3 pm one of the deceased entered the well near Bhimashankar temple in Chakki Naka area to clean it, but failed to return. Subsequently, the person who had summoned him went to check near the well, however he drowned too.

Finding the sudden disappearances suspicious the second person’s father too rushed to the spot after informing the Fire Brigade and police. Later even he (the father of the second person who entered the well) failed to come out, they added.

Meanwhile, the Fire Brigade officials reached the spot and began their rescue operation suspecting all the missing persons were inside. When the two firemen entered the well, they also allegedly inhaled the toxic gas and drowned.

“The well is very old and there is an open drain nearby. It is suspected that the chemical waste from the drain entered the well leading to release of some gas that led to the deaths,” said an officer of Thane police.

The deceased persons have been identified as Guna Goswami (60) and his son Rahul (30) and two firemen Pramod Waghchaure and Ananta Shelar. Meanwhile, the identity of one more deceased was yet to be ascertained at the time of going to press.

There was a blockage inside the well and hence the labourer had been summoned to clear it. The officials, however, said that the chemical strewed water from the open drain located around it contaminated the well.

The police have registered accidental death report and the exact cause of these deaths is under investigation, said an official. The autopsy reports of all the five persons are also awaited, the official said.