Building FOB not our duty: Ex-servicemen

One of the jokes making the rounds is, “Will the army help the Mumbai University teachers in the paper checking procedure?” 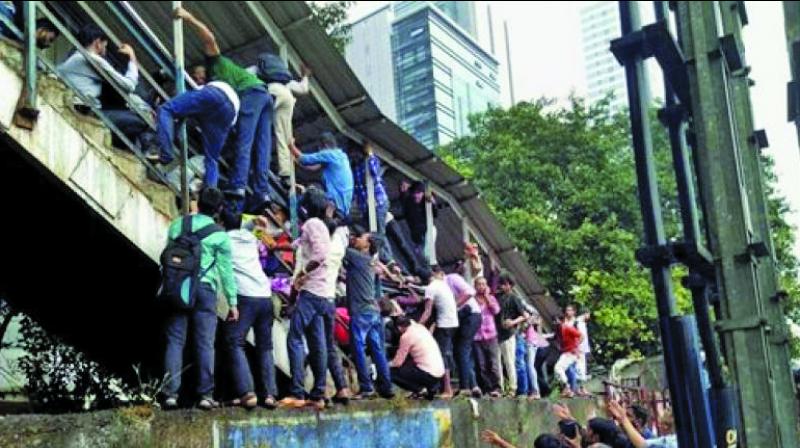 Around 23 commuters lost their lives after a stampeded erupted on a FOB in Elphinstone on September 29.

Mumbai: The decision to take the Army’s help for the construction of a new foot-over-bridge at Mumbai’s Elphinstone Road station has failed to cut ice with the citizens, netizens and the former army officers. Many have questioned the government, asking why has the army been roped in to construct a FOB at Elphinstone Road railway station which witnessed a major stampede on September 29.

Ex-army officer Brigadier Major Sudhir Sawant said, “I am completely against the government’s decision to direct the army officers to build a foot over bridge for the civilians. It is the concerned ministry’s duty to make sure the bridge is built and maintained, and not the army’s responsibility.” Major Sawant added, “If anything, it only shows that the concerned ministry is not capable of completing its responsibility.”

Throwing light on why the Army was roped in, sources said that it would have taken around two years for the Railways to build the same FOB and it lacked the proficiency of the Army, Border Roads Organisation (BRO) and General Reserve Engineer Force (GREF), which have strong operational expertise in road and bridge construction. The Army’s deadline for building the bridge is January 31, 2018, while the Railways is currently building another FOB at the station, which will be ready in a year.

Criticising the move, another ex-army officer, Gaurav Tripathi said, “If the Army is really tasked with building the Elphinstone Road foot-over-bridge, shouldn’t the salaries of the MLA, MP, everyone in Railways who should be authorised with the task and even joint secretary and chief secretary of Railways, be transferred to the Army Unit deployed to build the bridge.”

Similarly there have been ‘memes’ circulating on the social media hinting that if there are potholes and accidents, is the army going to be called in to fix that too. One of the jokes making the rounds is, “Will the army help the Mumbai University teachers in the paper checking procedure?”