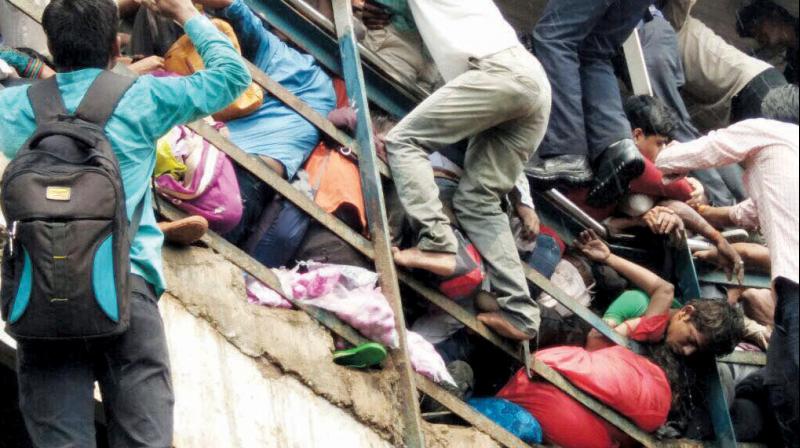 While more than 30 people were injured, 23 lives were lost in the tragedy on Friday.

Mumbai: The Mumbai police officials have reached out to the families of those who suffered in the stampede at the Elphinstone Road station on Friday, to return the ornaments found on the victims. So far, they have managed to return the belongings to eight such families and are trying to trace and get in touch with the families of six deceased persons, whose belongings are kept in the police station for now.

Following the horrific stampede at the foot-over-bridge that connects the Elphinstone Road and Parel stations, the deceased and the injured persons were taken to the civic-run KEM Hospital, where the ornaments were taken off before the initial treatment. These ornaments were then handed over the to Dadar police station.

Mumbai police spokesperson Deepak Devraj, deputy commissioner of police (Operations) told The Asian Age, “The police officers personally went to the victim’s house to return the ornaments, and signed a document of receipt, which said that the belongings, which included jewellery, cash, bag and mobile among others were handed over safely to the victim’s kin.”

However, a friend of the deceased Sujata Alva, who did not wished to be named said, “Police officials visited Sujata’s family on Saturday evening and while her rings were handed over, her mangalsutra is missing.” When DCP Devraj was told about the missing ornament, he said, “It was a stampede and mangalsutra is known to be very delicate. There is a possibility that it broke during the commotion. We have returned everything that was found on the body.”

Jyothi Shetty, a friend of Sumalata Shetty, a victim of the stampede, said, “All her ornaments were safely returned”, but refused to comment any further as they were in mourning.