Tandon tweeted, “It is shocking that citizens voices are not being heard.” 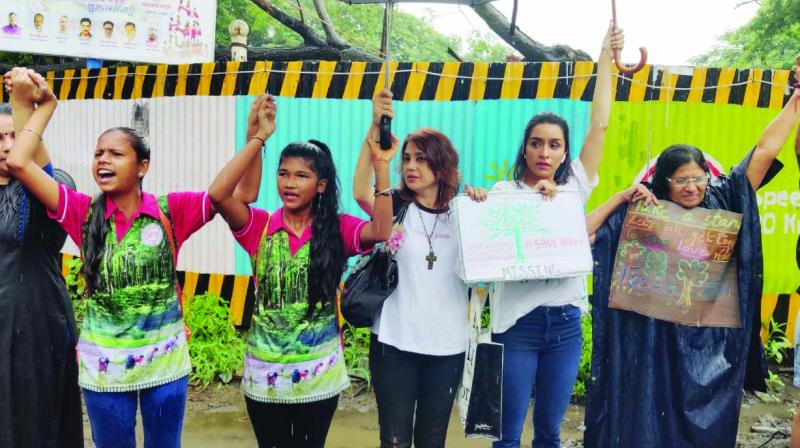 The civic body had received 82,000 objections against cutting trees in Aarey Milk Colony.

Mumbai: More than 1,000 people, including environmentalists and citizens of Mumbai, braved heavy showers to form a three-kilometre-long human chain on Sunday afternoon on Aarey Road in protest of the Tree Authority’s nod to the removal of 2,464 trees in the ecologically sensitive Aarey Colony, Goregaon.

While actress Shraddha Kapoor was part of the chain, celebrities such as Riteish Deshmukh, Raveena Tandon, Esha Gupta, Randeep Hooda and Vishal Dadlani, among others, expressed their support to the cause via Twitter.

“The chain was formed around the area marked for the Metro car shed to express their solidarity towards the trees and wildlife of Aarey forest. Citizens are gutted about this green cover being cut. Despite the Ganesh festival starting from Monday and heavy rainfall on Sunday afternoon, people came in from places such as Panvel, Dahanu, Palghar and Ulhasnagar to extend their support to the campaign and join the human chain,” said activist Amrita B.

Ms Kapoor said, “It is not acceptable that Aarey — the green lung of Mumbai — is being reduced by 2,700 trees. I learnt that there are alternative sites available for the Metro car shed. It is disappointing.”

Ms Tandon tweeted, “It is shocking that citizens voices are not being heard.”

It is to be noted that the Brihanmumbai Municipal Corporation had received 82,000 objections against cutting trees in Aarey Colony, which demanded that the car shed be shifted to an alternative site.

Activists will be appealing against Tree Authority’s sanction in the Bombay high court on Tuesday, stating that official procedure to sanction the proposal had been bypassed and that the Supreme Court is yet to deliver the final judgment on whether or not Aarey is a forest.