Mixed reactions to GST on Day 1

People still confused about new tax regime but willing to give it time. 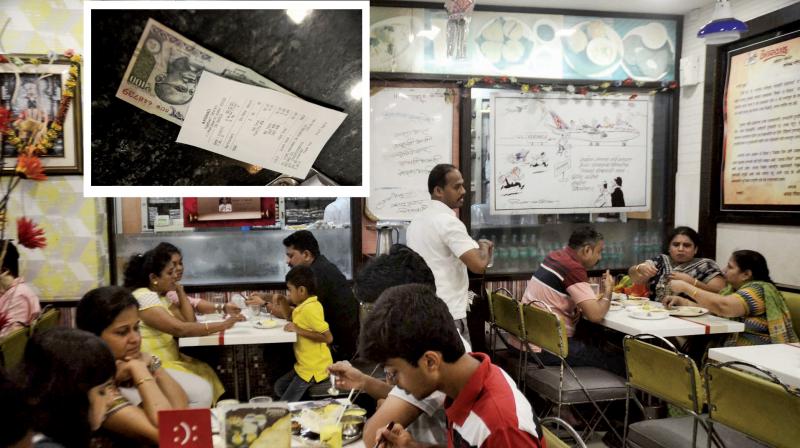 Hoteliers will be applying an 18 per cent GST. (Photo: Shripad Naik)

Mumbai: The Goods and Service Tax (GST) that came into force from July 1 seems to have been taken in good spirit by the general public at large. In fact, it has been called a ‘game changer’.

When The Asian Age spoke to people on the first day of the new tax regime and its impact on goods and services, it found people to be confused about the different tax slabs that are being applied on different commodities, but at the same time they were sure that they would get used to it as reforms take time to become norms.

Out on the streets, people were out shopping and enjoying their weekend, as they would normally do. But the fact that it was the first day of GST, made it a novel day for shopkeepers and retailers across the city.

When The Asian Age spoke to a retail store, Sarvodaya, in Dadar west, their store manager said, “It does not make much of a difference to retailers as stores anyway do not charge more than the MRP, which is the maximum retail price printed on the product. So far, everything is going smoothly.”

Coming out of the retail clothes shop, a homemaker Harshita Doshi said, “We are still trying to get a hang of GST and I think it will take at least a month or so to completely understand it. Since this is the first day, it is way too early for us to come to any conclusion.”

However, Sameer Gupta, a fashion designer, who owns a shop in South Mumbai, slammed the new tax. He told this paper, “My shop is anyway making a loss in the business, and GST has further added to my misery, as whatever profit I was making from the sales will directly reach the Government’s tax department, leaving me with absolutely nothing.” Mr Gupta added, “I recently purchased a flat worth Rs 1 crore and am almost regretting my decision as I am now liable to pay around Rs 12.5 lakh as a tax, which is insane.”

While the hoteliers will be applying an 18 per cent GST, 9 per cent each on CGST and SGST, the owner of the Aaswad Hotel in Dadar west, Suryakant Sarjoshi, said, “The taxing system is new for us, as we never charged tax on food, and gave a discount instead. The customers simply ask us what are the new taxes charged in the bill, and after telling them about the GST, they agree on the same and pay up.”