The chief minister said the crop loan was higher this year by Rs 3,500 crore as compared to 2016. 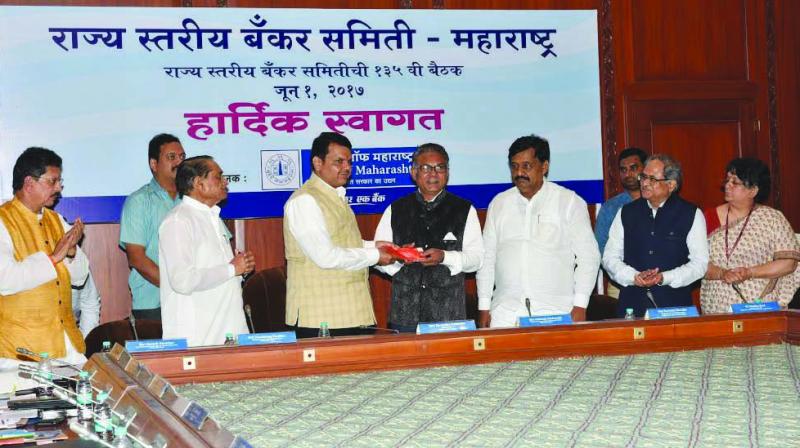 Chief minister Devendra Fadnavis at the meeting with state bank heads on Thursday.

Mumbai: In a bid to help farmers ahead of the Kharif season, chief minister Devendra Fadnavis on Thursday held a meeting with all state banks and decided to give Rs 54,000 crore as crop loan. Also, the term loan of Rs 23,000 for farmers was approved during the meeting. The chief minister said that the state was planning a strategy for 13 district cooperative banks that did not have liquidity that would act as agents for nationalised banks and lend to farmers.

The chief minister said the crop loan was higher this year by Rs 3,500 crore as compared to 2016. “The banks have decided to give Rs 54,000 crore as crop loan and Rs 23,000 crore term loan. This year, 13 district banks in Nashik and Jalgaon have no liquidity. We want the national and commercial banks to appoint these banks as their agents and make loans available to farmers. A strategy in this regard will be prepared in the next seven days so that the district bank can disburse loans,” he said.

On the loan waiver for farmers, the chief minister said that his government was positive and had taken the decision at the right time. “We have taken many decisions for farmers as compared to the last government. We have brought schemes of Rs 12,000 crore for farmers in just two years while the previous government spent only Rs 4,000 crore. We are also giving them a higher minimum support price (MSP),” he said.

Claiming that his government’s emphasis was on the agriculture sector, the chief minister said that he was trying to bring farmers who had left back into the credit system.