Metros   Mumbai  02 Jun 2017  A week after rescue, Jackal dies due to choking at SGNP
Metros, Mumbai

A week after rescue, Jackal dies due to choking at SGNP

SGNP officials confirmed that the post-mortem report said that the two-year-old jackal had no ailment. 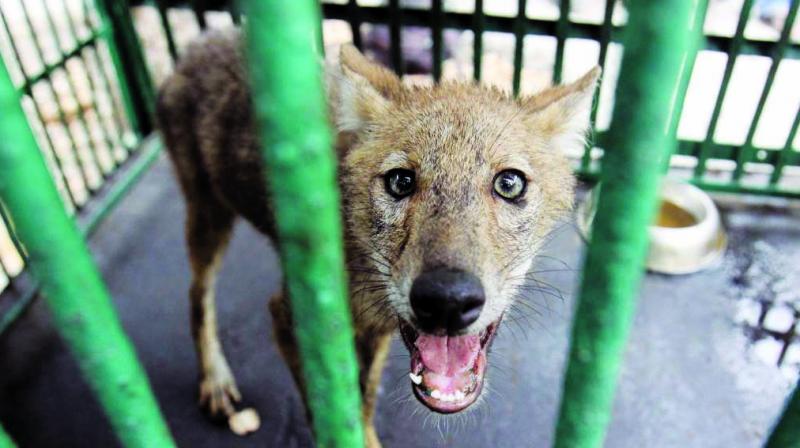 Post-mortem report revealed that the jackal died due to asphyxia and had no ailments otherwise.

Mumbai: The wounded sub-adult golden jackal — that was rescued from Godrej staff quarters in Vikhroli about a week ago and later sent to Sanjay Gandhi National Park (SGNP) for treatment and recuperation — died a few days ago due to choking, officials confirmed.

The jackal was brought to SGNP at around 11pm last Wednesday after being rescued from a pit near Godrej staff quarters into which it had fallen while being chased by stray dogs. In a 20-minute operation, the animal was transported to SGNP in a fibre cage and had been kept under observation since. SGNP officials who were attending to the young male jackal said that while it had no disease, it was found weak with a minor wound near its right shoulder. On May 26 at around 6 am however, the jackal was found dead. Officials said that the animal had consumed chicken the previous evening and even drunk some water. However, the caretaker, during his rounds to check on the jackal, found it dead. The post-mortem conducted the same day by experts and pathologists from Bombay Veterinary College revealed that the animal succumbed to asphyxia due to regurgitation or swallowing of its feed. Choking of the oesophagus and pharynx was caused due to regurgitation of food.

Dr Shailesh Pethe, SGNP veterinarian, said, "Death by choking in animals is as good as drowning and is as quick. It is one of the most unfortunate ways in which any animal can die.”

Jackals fall under schedule III of the Wildlife Protection Act (1972). Around twelve of them are believed to be residents of the Vikhroli.