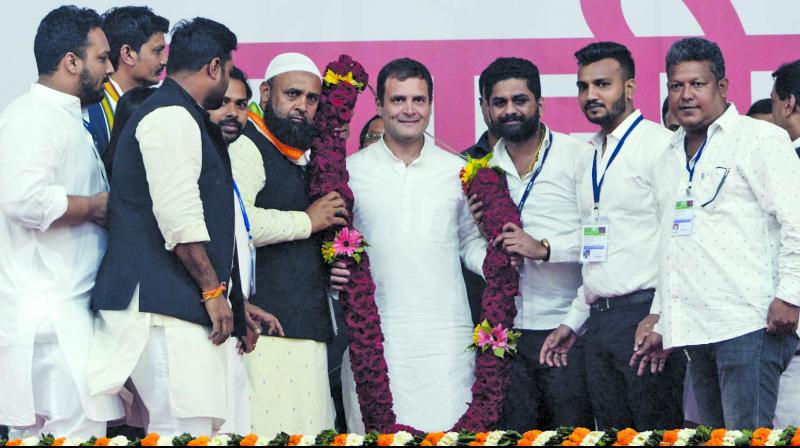 Mumbai: Targeting Prime Minister Narendra Modi, Congress president Rahul Gandhi on Friday said that while the Prime Minister has been telling the media in the wake of the Pulwama terror attack that India is united, he has also been lashing out at the Congress.

The Congress president said Mr Modi also indulged in this behaviour at the inauguration of the National War Memorial, a monument built to honour the nation's Armed Forces, recently.

Mr Gandhi, who was addressing a rally at Dhule in Maharashtra, also ridiculed industrialist Anil Ambani over the controversial Rafale aircraft deal, saying that Mr Ambani couldn't even make a paper plane.

Beginning his speech by welcoming wing commander Abhinandan Varthaman, the captured Indian Air Force pilot released by Pakistan on Friday, the Congress leader started attacking the Prime Minister while cries of ‘chowkidar hi chor’(the watchman himself is a thief) rent the air.

Ridiculing the Prime Minister for announcing the establishment of 100 smart cities in the country, Mr Gandhi said that Mumbai is the smartest city in the world. “One has to understand the power of this city”, he remarked.

Issuing Mr Modi an open challenge on the issue of corruption, Mr Gandhi said that the chowkidar (the Prime Minister) is not only a chor but also darpok (coward). Mr Modi would not speak while maintaining eye-to-eye contact because he is a chor, alleged Mr Gandhi.

Asking the people rhetorically if anyone had received Rs 15 lakh in their accounts, Mr Gandhi said, “But I assure you that the Congress government will give minimum income guarantee to the poor of this country, be it in city or village, without any discrimination over caste and religion.”

Attacking on the Bhartiya Janata Party (BJP) over its poll promises, the Congress president said that those who want to hear falsehoods and ‘Mann ki Baat’ should attend the meetings of Mr Modi. Those who want to hear 'Kaam ki Baat' (worthy and truthful talk) should come here, he said.

Mr Gandhi has also alleged that Rs 3.5 lakh crore loan had been waived off for 15 people by the ‘chowkidar’, but the loans of small-scale traders, the youth and labours have not been waived.

“What wrong have they (traders, the youth and labours) done? Prime Minister wants to make two Indias - one for the 20 people (industrialists) and the others for farmers,” he said.