Mandavgane and six others died on Wednesday, when the IAF chopper crashed in Budgam district of Jammu and Kashmir. 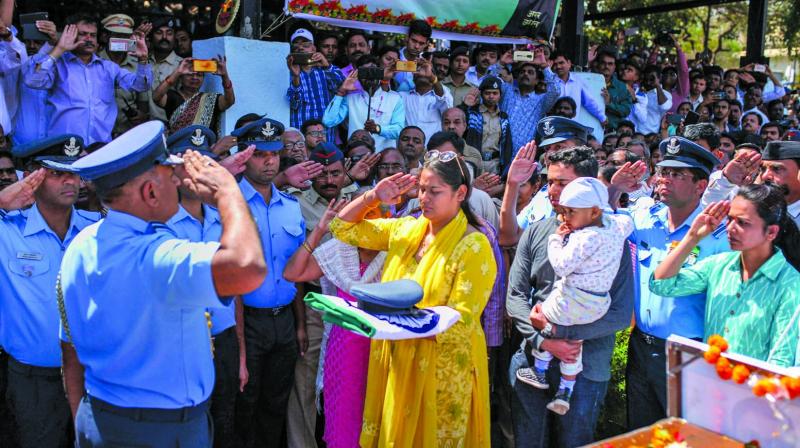 IAF personnel and family members of Squadron Leader Ninad Mandavgane during his funeral in Nashik on Friday. (Photo: PTI)

Mumbai: The mortal remains of pilot Ninad Mandavgane, who died in an Indian Air Force (IAF) helicopter crash in Jammu and Kashmir two days back, were consigned to flames with full military honours here on Friday.

Mandavgane (33), who hailed from Nashik, was cremated on the bank of Godavari river around 12.30 pm. Mandavgane and six others died on Wednesday, when the IAF chopper crashed in Budgam district of Jammu and Kashmir.

Air Force officials, including Air Commodore Samir Borade, commanding officer of the IAF Station Ojhar, and Nashik Collector Radhakrishna B, paid tribute to the pilot .The body was later taken to his residence in Nashik. A large number of people gathered at the crematorium on Friday to bid adieu to the departed soul.

When the body was brought to the crematorium around noon, people present there raised slogans of ‘Vande Mataram’ and ‘Bharat Mata Ki Jai’. Mr Mandavgane's father Anil, mother Sushma, wife Vijeta and their two-year-old daughter, his relatives and other people attended the funeral at Nashik.