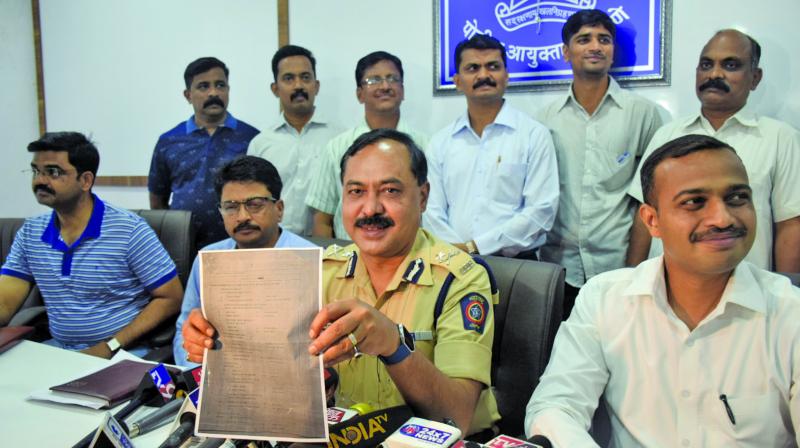 Police show a copy of the leaked army exam paper.

Mumbai: Two accused among the 21 who have been arrested so far by the Thane crime branch for orchestrating the leak of Sunday’s army recruitment board’s question papers, Santosh Shinde and Sandip Nagare, had earlier twice flunked the same test.

Police suspect that Shinde is the main accused in the army paper leak scam. According to the crime branch officials, the duo then decided to rig it to make money.

An official privy to the probe said that Shinde is the one who had allegedly taken the original leaked army exam question paper from one of the three serving army officials, who are under the scanner. “Shinde circulated the original question papers to other coaching centres and asked for money from them,” the official said. Shinde started coaching centres in Phaltan to train test aspirants whereas Nagare in Nagpur. Both have been booked for accessing army’s secret papers and selling them to candidates. According to police, Shinde and Nagare had appeared for the army recruitment board exam twice few years ago but had failed to clear it. Senior police inspector of crime branch Nitin Thakrey said, “ The accused started running academy after they failed in the exam.”

Sources further said that Shinde was is in the constant touch with one Dhaklu Patil, an army officer who is posted in Nagaland. He was running his academy in Phaltan. He is one of the main accused in the case. Earlier, he had allegedly taken money twice to send the leaked question papers. Nagre was handling his academy in Nashik called Career Academy for the past three years. “In the past year, they took Rs 50 lakh from every academy to give them the leaked question paper. This time they demanded Rs 1.35 crore”, said an official.

Meanwhile, the Thane police has informed the army authorities about the role of three army officials Ravindra Kumar, Nigamkumar Pandey and Dharamvir Singh in the paper leak scam. The trio is yet to be arrested.