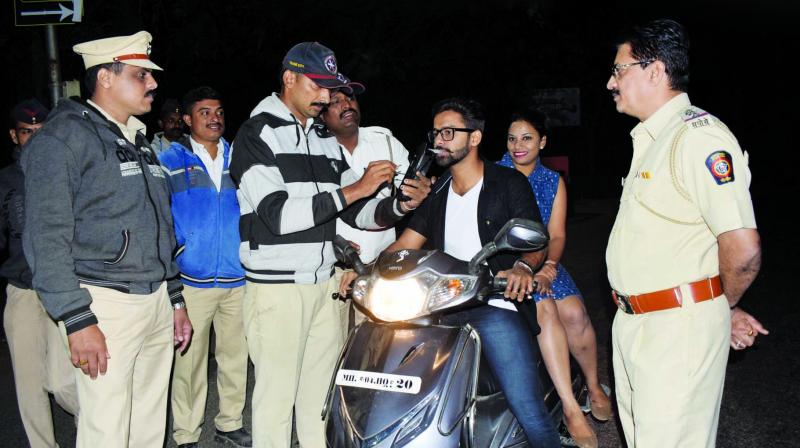 The police registered 1,114 cases of rash driving and over speeding and another 9,121 other offences, including riding triple seat, without helmet, wrong parking etc. (Photo : DK)

Mumbai: As many as 2,978 persons were booked for drunk driving from the Mumbai Metropolitan Region (M-MR), the highest from Th-ane, during New Year celebrations.

Among other cases of traffic related violations, the police registered 1,114 cases of rash driving and over speeding. Another 9,121 other offences, including riding triple seat, without helmet, wrong parking etc., were registered by the traffic police.

“A proposal seeking the suspension of license of the accused motorist and two wheeler riders for the period of six months will be sent to the RTO,” said a traffic police officer.

“The cases were mostly registered from Thane city and further action has been initiated against them,” said Sukhada Narkar, Thane police spokesperson.

The Navi Mumbai police meanwhile booked 350 persons for drunk driving from various parts of the city.

The Thane Rural police also cracked down on drunk driving and booked 102 cases against bike riders mostly in Mira Road and Bhayandar divisions.

The number soared by around 30 per cent as compared to 2017. The police collected penalty to the tune of over `83,000 from motorists for various other traffic related offences including –driving with licenses, signal jumping, triple seat and rash driving.

Last year the drunk and driving cases had stood at 78, police said. The Navghar police had devised an innovative idea to nab those motorists who tried to give a slip to the police teams.

“Armed with portable laser lights, our personnel flashed the light as a signal to their colleagues ma-nning the nakabandi ahe-ad, in case a biker managed to dodge and zoom away,” said, Ram Bhalsi-ngh, senior police inspector. Sustained efforts and an extensive awareness campaigns will continue in the new year too. “Since drunken driving is a serious offence, those who were found driving under the influence of alcohol will be produced before court to decide their quantum of penalt,” said Jagdish Shinde.