A huge portion of garbage also ends up in the sea through the city's nullahs and rivers, which have now become a dumping spot for citizens 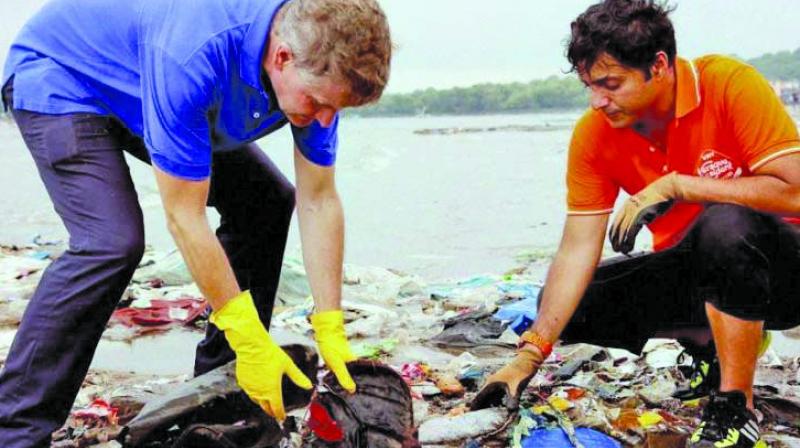 Mumbai: Versova beach has been cleared of a jaw-dropping 6.2 million kg of plastic during a year-long drive spearheaded by Afroz Shah, a Mumbai-based environment lawyer.

The drive, conducted through 2017, included 116 clean-up exercises involving 50,000 volunteers, including children. Amid the growing menace of plastic, the lawyer asserted the need to monetise plastic and make ‘zero garbage’ houses.

Mr Shah said, “There are four basic things that can be adopted for a plastic-free life. One is to monetise plastic. Second is to go and clean up the outside like the beach clean-up to prevent litter. Third is to make your houses ‘zero garbage’. Four is to encourage others to adopt this lifestyle.”

A huge portion of garbage also ends up in the sea through the city's nullahs and rivers, which have now become a dumping spot for citizens.

“The first nullah that opens into the sea is in Siddharth Nagar, Goregaon. We go there every week for two hours to educate people about handling plastic properly. There are several other nullahs that empty plastic waste into the sea; the waste accumulates for years being non-biodegradable,” he added.

In 2017, the team has cleaned 64 public toilets in 62 weeks and planted 530 trees. The lawyer is now set on persuading restaurants to go for plastic-free food services. One look at his Twitter account reveals the basic habits that can be inculcated to reduce unnecessary use of plastic.

“Last night was a crowded dinner affair at my place. Twenty-five volunteers came over for dinner. Food was ordered, picked up and gobbled. All this — without using any plastic packaging. A simple tweak in our heads and we jump on to the bandwagon of doing our bit for nature,” read his Facebook post.