Indian Navy gears up to induct more submarines, warships in 2017

Khanderi is the second submarine of the Scorpene -class submarines, which are being constructed at the Mazagaon Dock Shipbuilders Ltd. 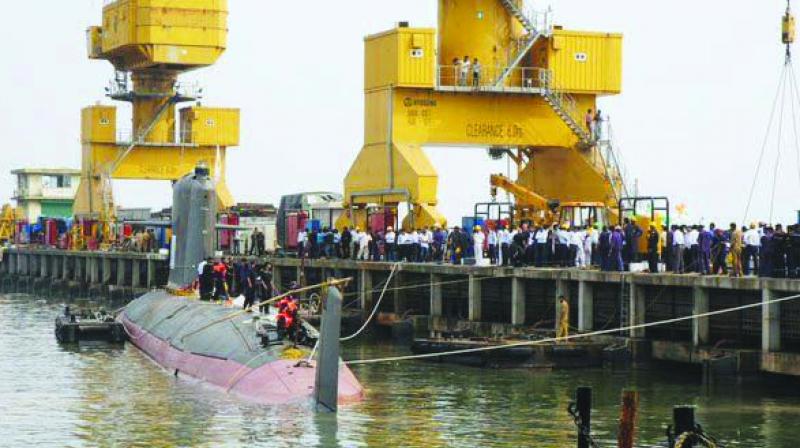 Mumbai: The Indian Navy’s Western Naval Command is set to induct more warships and submarines in 2017. According to naval sources, submarine INS Khanderi will be set afloat this month. Khanderi is the second submarine of the Scorpene -class submarines, which are being constructed at the Mazagaon Dock Shipbuilders Ltd (MDL). MDL was earlier planning to set Khanderi afloat last month, but the plan was postponed in the wake of the mishap involving the Brahmaputra-class guided missile frigate INS Betwa (F39) that was undergoing a refit at the Naval Dockyard in Mumbai. Two personnel were killed and over a dozen were injured when the INS Betwa tipped over during an undocking exercise.

Further, the first Scorpene- class submarine INS Kalvari is also likely to get commissioned in March this year. Earlier, the giant submarine was supposed to get commissioned into the naval fleet in September 2016. But being an indigenous submarine, it was put through several trials, which took a lot of time, said naval sources. The submarine has of late added another torpedo to its armoury, the sources added. INS Kalvari is armed with six 533-mm torpedo tubes that can deploy SM-39 Exocet Block 2 anti-ship missiles.

Commenting on the capacity of INS Kalvari, an official said, “Even though it is powered by diesel, the 67-metre-long submarine, which has a 6.2-metre diameter, has been designed to minimise noise and act with stealth in war theatres. A specific technology — an air independent propulsion system — will ensure that it stays underwater longer.”