Mothers, fathers believe kids will make the year ahead ‘lucky’ for them. 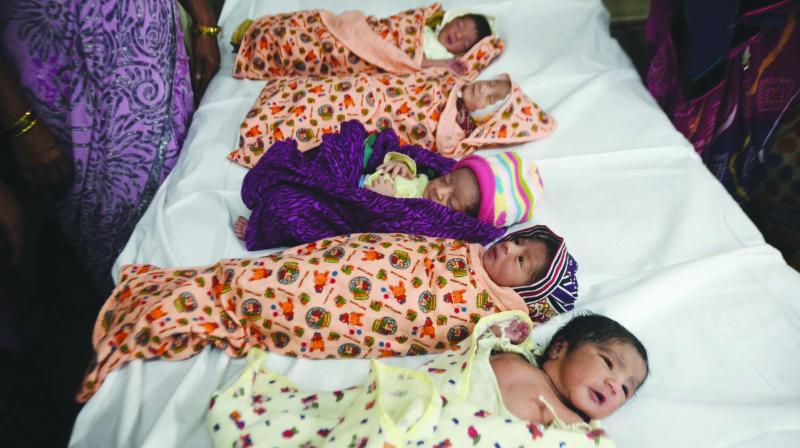 Four of the 15 babies that were born at exactly 12 am on Sunday at the civic-run Sion Hospital. (Photo: Shripad Naik)

Mumbai: Forty four babies were born at the stroke of the midnight hour on Sunday across the city’s state–run and civic–run hospitals. The beaming parents said their offspring would make 2017 “lucky” for them.

The parents said they felt it was as though their babies had decided to be born at the beginning of the New Year. While talking to The Asian Age, the dean of the Sion Hospital, Dr. Suleman Merchant, on Sunday said, “Sion Hospital has been blessed by 15 babies, who were born yesterday night. Annually, over 14,000 babies are born here. At times the daily number touches 100. Comparatively, there were much fewer births, but our staff handles any amount with equal effectiveness.”

The parents of the newborns said they were overwhelmed by their good fortune. One mother, Nanda Sandip Sakhat, said, “It’s our first child. We would like to express our thanks to all the staffers and the hospital, which took good care of us.” Another mother Sandhana Singh said, “ I was admitted in the hospital on December 30, hoping to deliver and get discharged by December 31 to celebrate New Year.”

“But for two days, I only experienced mild labour pains. This gift is much more pleasant than any New Year’s celebration. There is nothing better than to give birth to a new life during New Year celebrations.” Apart from the 15 children who were born at Sion Hospital at midnight, 13 were born at KEM Hospital, 10 were born at Cooper Hospital and 6 were born at the civic- run Nair Hospital.