Once a social body for Maratha youths, the outfit has become a political party. 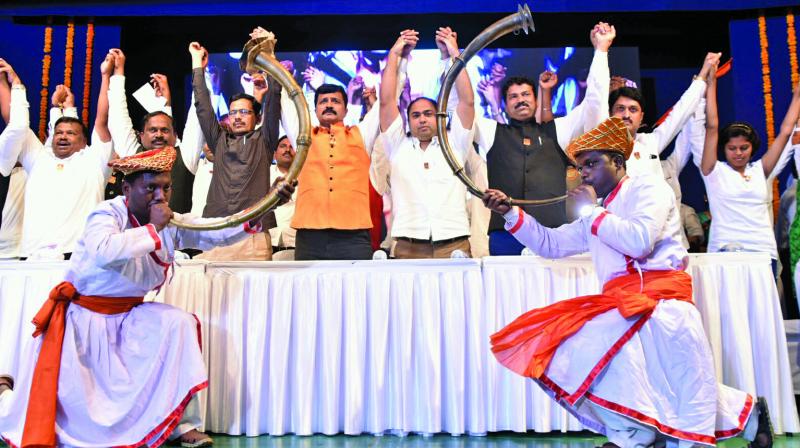 Sambhaji Brigade leaders at the launch of their political party on Wednesday.

Mumbai: Sambhaji Brigade, after turning into a political party, has decided to flex its muscles in the forthcoming Brihanmumbai Municipal Corporation (BMC) polls.

Once a social organisation for Maratha youths, the Sambhaji Brigade on Wednesday announced that it has turned into a political outfit at a special event held at Bandra. It also revealed its plans to contest the Zilla Parishad (ZP) and BMC polls.

Manoj Akhare, president, Sambhaji Brigade, said, “It is the only party in the state which consists of youths and we want to create our own space in state politics.”

The brigade was one of the leading outfits, which organised Maratha marches across the state in protest of the rape and murder of a Maratha girl in Kopardi, Ahmednagar. According to Brigade officials, there are five lakh members in the state, of which 80,000 are from Mumbai.

“Though we will not contest all 227 seats in the BMC, we will definitely fight on some of the seats where we will get good candidates. We will first prepare our agenda for the BMC polls by December end and then select candidates,” said Mr Akhare.

The outfit came into prominence after its members ransacked the Pune-based Bhandarkar Institute of Oriental Research in 2004. It destroyed precious books and historical documents to protest against the institute’s help to historian James Laine, who wrote Shivaji: Hindu King in Islamic India. The book has “derogatory” remarks towards Shivaji Maharaj, the outfit had alleged.

Early in November, it has also vandalised a multiplex in Kalyan while protesting against Karan Johar’s film Ae Dil Hai Mushkil as it featured Pakistani artistes.

However, senior political analyst Prakash Bal said Sambhaji Brigade would have not much impact on the BMC polls. “The BMC election will not be contested on Maratha reservation issue, but on the civic issues in the city. They may have influence in some of the rural areas in the state, but have very little presence in Mumbai,” he said.