Aaditya will be the first person from the Thackeray family to enter electoral politics. 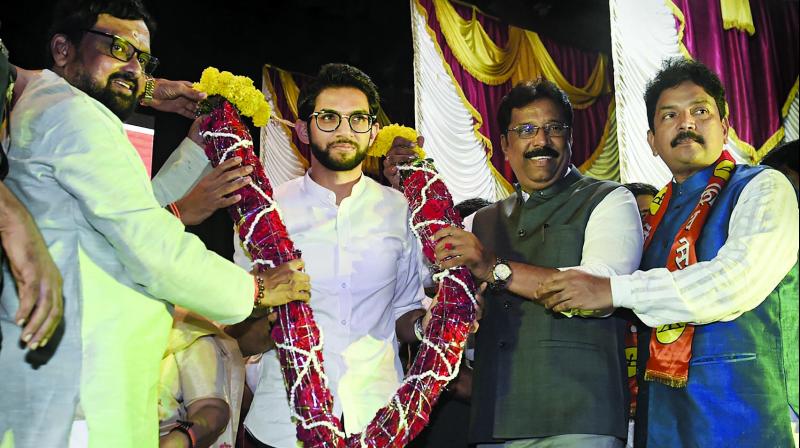 Mumbai: In a much-anticipated move, Yuva Sena chief Aaditya Thackeray on Monday announced his decision to contest the upcoming Vidhan Sabha polls from the Sena bastion of Worli. Aaditya will be the first person from the Thackeray family to enter electoral politics.

Announcing his decision to contest the Assembly election, Aditya said, “I can only do politics, nothing else. Politics is necessary if anything good needs to be done in the society. It is one medium through which your decision can improve the future of lakhs of people.”

Calling it a historic moment for himself and his family, Aditya claimed that he has not taken the decision for himself, but to fulfil the dreams of people.

The Asian Age was the first publication to report about Aaditya’s intention to fight the upcoming polls.

Aaditya’s seat — Worli — is considered to be one of the safest seats for the Sena. Its sitting MLA, Sunil Shinde, had defeated former NCP leader Sachin Ahir in 2014 polls. With Mr Ahir, who represented the constituency as NCP candidate from 2009 to 2014, also now in the Sena, Aaditya’s win looks all but a formality.

After the Lok Sabha polls, the Sena has been making systematic efforts to project the junior Thackeray as its face. As part of its efforts, it had also organised the Jan Ashirwad Yatra, headed by Aaditya, which aimed at reaching out to the youth.

On Monday, Shiv Sena's youth wing Yuva Sena released a video song for Aaditya Thackeray. The song projects Aditya as the future of Maharashtra and as a leader who can transform the state.

"Aala rey aala Aaditya" and "Yehi hai wo waqt naya Maharashtra banane ka. Maharashtra mein hoga Adidtyoday" are the highlights of the song. The video is a compilation of Shiv Sena's rallies that Aaditya has either attended or addressed.

Uddhav Thackeray had on Saturday recalled the "promise" he had made to his late father Bal Thackeray to install a 'Shiv Sainik' (party worker) as the chief minister of Maharashtra. His statement had come against the backdrop of the BJP top brass repeatedly stressing that incumbent Chief Minister Devendra Fadnavis would helm the state once again.