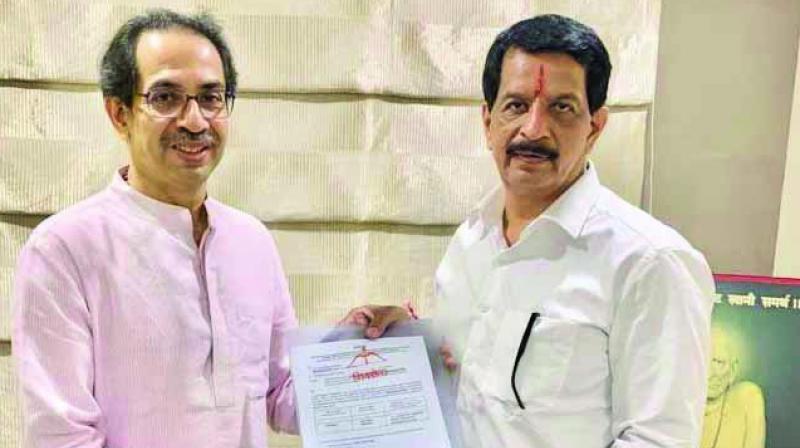 Shiv Sena chief Uddhav Thackeray handed over the ‘AB form’ to the former IPS officer on Monday. ‘A-B forms’ are the documents submitted by political parties to the Election Commission sponsoring their candidate.

The Sena is hoping that the former top cop will be able to end the dominance of Hitendra Thakur-led Bahujan Vikas Aghadi (BVA) in the constituency.

The area is a bastion of the BVA chief, whose son Khsitij is the sitting MLA.

In 2014, Kshitij had defeated Bharatiya Janata Party’s Rajan Naik by a margin of over 50,000 votes while the Shiv Sena candidate was a distant third with mere 40,321 votes.

After Mr Sharma had joined the Sena on September 13, it was being speculated that he would be given the ticket to contest the upcoming polls.

During his induction into the party, the Shiv Sena chief had lauded Mr Sharma saying earlier his gun would speak, and now his ‘man’ (heart) will speak.

Mr Sharma had also invoked memories of late Shiv Sena chief Bal Thackeray saying he was inspired by him when he was in the force.

Mr Sharma was recently inducted back into service after few years of suspension.

The senior inspector was suspended for his alleged involvement in the fake encounter of alleged gangster Lakhan Bhaiya.

Mr Sharma and 13 other policemen were arrested in the case and later suspended in 2008.