It took the fire brigade and NDRF personnel hours before they could rescue him. 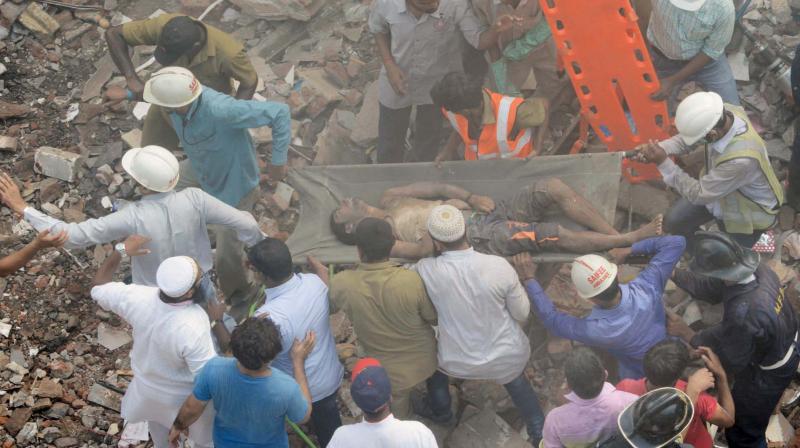 Rescue personnel carry a survivor from the site after rescuing him on Thursday. (Photo: Rajesh Jadhav)

Mumbai: Thirty seven persons who were injured in the collapse of Bhendi Bazaar’s six-storeyed Hussaini Mahal building on Thursday morning, were rushed to the nearby JJ Hospital. Jaffer Rizvi (30), was trapped under the rubble and was in touch with his family and friends through WhatsApp since morning. It took the fire brigade and NDRF personnel hours before they could rescue him.

Ghulam Khan, one of the survivors, suffered multiple external injuries and was admitted to the hospital, said, “We were sleeping downstairs and suddenly there was a loud noise. I realised I was trapped inside debris soon after. After an hour, the fire brigade personnel rescued me. I was lucky to escape with my life,” he said.

Another survivor, Abdul Latif (25), who was working inside the ‘Tawwakal’ sweet shop, said he was still in a daze. “I was busy making preparations for sweets and suddenly a huge pillar fell on me. Before I could figure out what was happening, I was buried in the debris and unconscious when I was rushed to hospital. I have a fracture on one leg and hand as well as a head injury,” he said.

Twenty ambulances, 10 fire brigade engines, 200-odd fire brigade personnel and a 45-member team from the National Disaster Response Force were a part of the rescue operation.