Maratha stir: Another kills self in Beed

A M.Sc. pass hanged himself from a tree and eight other protestors tried to immolate themselves. 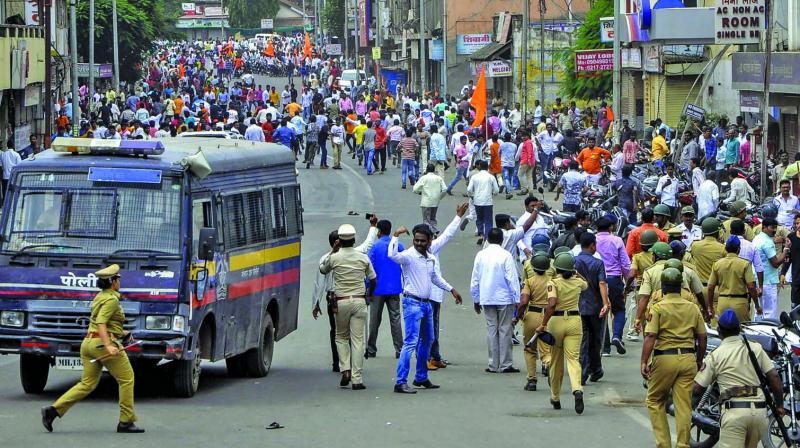 Police clash with the Maratha Kranti Morcha protesters during their district bandh called for reservations in jobs and education, in Solapur, on Monday. (Photo: PTI)

Mumbai: Violent protests over grant of reservation to the Maratha community continued in the Marathwada region of the state. Abhijit Deshmukh (35), a M.Sc. pass, committed suicide by hanging from a tree even as eight other protesters from Ausa, Latur, also tried to immolate themselves. So far, six protesters have taken their lives in the past eight days of the agitation.

Mr Deshmukh was a resident of Veeda village of Kej tehsil, Beed district. He hung himself to death from a tree near his house, said the police. According to Beed superintendent of police G.Sridhar, Mr Deshmukh took his own life over the Maratha quota cause. “We found a suicide note in which he mentioned that he was taking the extreme step in support of the Maratha reservation demand,” said Mr Sridhar. Mr Deshmukh’s was the sixth such death in the agitation.

On Tuesday, eight protesters from Ausa tehsil, Latur district, poured kerosene and tried to immolate themselves. However, the police intervened in the nick of time and rescued all of them. All members of the Maratha Kranti Morcha (MKM), they were on a “sit in” agitation in front of the tehsil office. In another incident, Mara-tha protesters burned down an effigy of senior leader Narayan Rane for meeting chief minister Devendra Fadnavis on behalf of the Maratha community.

As protests continued  across the state, leaders across political parties made an appeal for peace. “We request the protesters not to take the law into their hand. It is true that the state government has cheated them. We must peacefully protest against it,” appealed Congress chief Ashok Chavan.

NCP leader Ajit Pawar said, “With folded hands, I request the protesters not to take extreme steps like suicide and also not damage public property. The government failed in its duty but we will protest in a peaceful manner.”

Meanwhile, Mr Fadnavis assured the Maratha community that his government was committed to th cause of reservation. “We established the backward classes commission. Our government brought the Maratha reservation issue in the house for the first time. We appeal to people not to take law into their own hands. We will keep our word,” he assured.