Maratha group's new demand includes compensation for the people who were injured and killed during the July 25 violent protest. 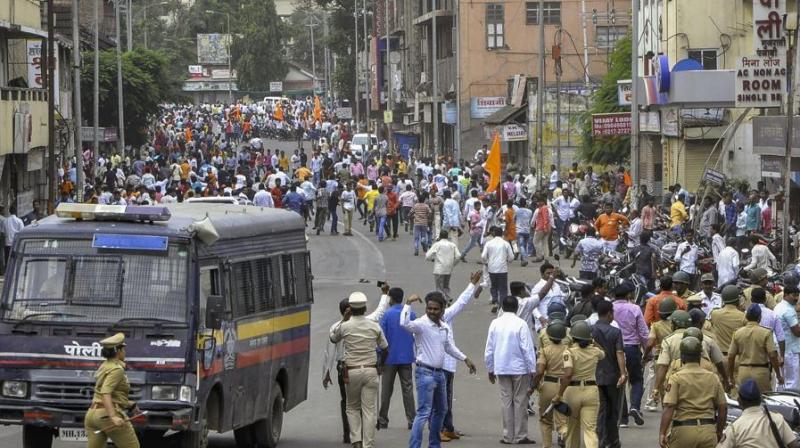 The major demand of the protestors include Maratha reservation, all cases against protestors to be withdrawn, strict action to be taken officers for firing and lathi charge during the July 25 protest. (Photo: File)

Mumbai:  As the Maratha outfits decide to intensify protests from today, Maharashtra Chief Minister Devendra Fadnavis on Tuesday said his government’s promise to grant reservation to the Maratha community and denied all the allegations against the BJP-led administration of delaying the process.

The Maratha group had announced ‘Jail Bharo Andolan’ on Tuesday to start from today at Mumbai’s Azad Maidan.

The major demand of the protestors include Maratha reservation, all cases against protestors to be withdrawn, strict action to be taken officers for firing and lathi charge during the July 25 protest. They have also demanded the resignation or sacking of ministers and MLAs who gave statements against the community, complete loan waiver, solution to unemployment for their community.

Their new demand includes compensation for the people who were injured and killed during the July 25 violent protest.

Mumbai police claimed that they have ample security arrangements to tackle today’s agitation, and to maintain law and order. Police has issued an alert in other parts of the states as well for any sudden violence or protest.

According to a report, Maharashtra CM said, “Some people have suggested that we issue an ordinance for reservation. We can do that, but such an ordinance will not last even a single day in the courts. Our government is working towards a reservation that can withstand legal scrutiny and get implemented. For that, we have to follow a specific legal procedure as laid down by the apex court in its 1992 order.’’

According to 1992 Supreme Court order, if reservation quota is to be hiked over 50 per cent, “extraordinary circumstances and evidence of social backwardness” of the community must be shown by appointing a backward class commission.

“If we look at reservations only from an emotive angle, then we will succeed only in fanning anger in the community. But, if we have to ensure reservation to the community, then we must understand its legal aspects. Our stance is that reservation must sustain and be legally sound,” Fadnavis added.

Fadnavis ensured that his government has set up a commission to ensure the reservation is granted to Marathas.

Shantaram Kunjir, one of the coordinators of Maratha Kranti Morcha (MKM) said the protestors will meet their respective legislators and MPs with their demands and request them to raise the issue. The community members will stage a sit-in outside lawmaker’s house and would go on for eight days.

Another coordinator representing MKM, Sanjeev Bhor said that they have been getting assurance from the governments but have never been implemented. The government wants them to withdraw the protest but he questioned the government’s intent. The violence during the previous agitation is the result of the mishandling of unrest by the government.

Apart from today’s agitation, on August 9, a Maratha Kranti Janandolan will take place in which protesters will take to the streets with their cattle and farming devices. The community also announced about a non-cooperation movement in which Marathas have been asked not to pay any utility bills and taxes from August 9.

So far, five people have reportedly taken their lives demanding reservations for Marathas, while one, who also attempted suicide, is being treated at a local hospital.