The incident occurred at 1.30 pm at platform number 7 of Kurla station. 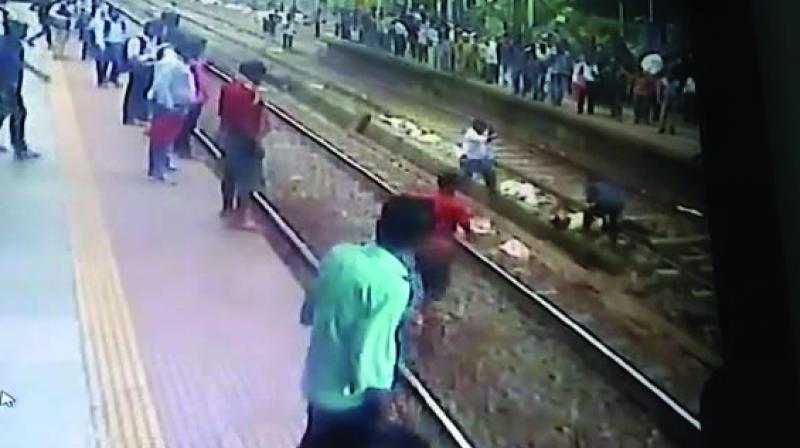 Video grab of the incident; passengers are seen lifting the man from the tracks in order to save him.

MUMBAI: A 54-year-old man tried to kill himself at Kurla station but was saved by Railway Protection Force (RPF) personnel and railway commuters on Monday afternoon.

The man identified as Narendra Damaji Kotekar, a resident of Chembur lied down on the tracks while the train was approaching the station.

A RPF constable, Dayaram Pal, Maharashtra Security Force personnel along with the commuters rescued Mr Kotekar. The incident was captured in the CCTV camera and soon the video went viral.

According to a Kurla RPF personnel, the man said that he was fed up of family issues and which is why he tried to commit suicide. Later on, the man was handed over to his family after police verification. Kurla RPF in-charge, Suresh Atri said, “The incident occurred at 1.30 pm at platform number 7 of Kurla station. The man lied down on the tracks to end his life but fortunately the on duty RPF constable Dayaram Pal and MSF staff Sandeep Phad saw him and rushed to rescue him as the train was about to arrive on the same track.”

He added, “We have counselled him and instructed him not repeat such mistake again. He has been let off.” The RPF had also called his family members and entrusted him to them who in return thanked the RPF personnel.

RPF jawan and other passengers on the platform immediately jumped on the tracks after seeing Mr Kotekar laying down on the tracks.

Last week, an alert constable had saved a woman from falling on to the tracks after she lost her balance while alighting from a CSMT bound local train at Kanjurmarg as her saree had got entangled with the train’s door on July 24.

The incident had happened at 3.00 pm at platform number 2 of Kanjurmarg where the RPF constable was posted. On hearing the woman’s screams, the constable rushed to save her, catching her hand even as she was getting dragged by the train due to entangled saree.