Though heavy rains resulted in water logging in few areas of Sion and Hindmata area in Dadar, it did not affect vehicular traffic majorly. 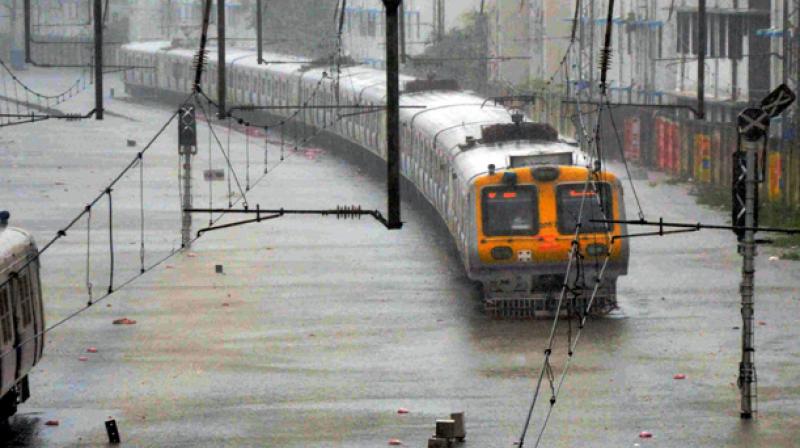 Mumbai: After a brief spell of drizzle in the last two days, heavy rains lashed the city and adjoining areas this morning affecting suburban rail services on both routes of the Central Railway.

According to an official in BMC's disaster management control room, despite incessant rains there have been no reports of any untoward incident in the metropolis in the last 24 hours.

Though heavy rains resulted in water logging in few areas of Sion and Hindmata area in Dadar in the city, it did not affect vehicular traffic majorly, they said.

However, local trains on Harbour and Central line of CR were running late Saturday morning.

In the last 24 hours, suburban Mumbai and adjoining areas received more rainfall than the island city.

"Between 8:30 am yesterday to 8:30 am today, weather stations at Colaba and Santacruz observatory recorded 7 mm and 93.2 mm rainfall respectively," officials said.

Another official from the civic body said the city has received average rainfall this month, easing water woes.

He said that stock in seven reservoirs which supplies water to the city has touched their highest level this time as compared to the last three years.

"It means that catchment areas have received decent rainfall over the last few days," he said adding that the water stock in lakes were 4.5 lakh million litre on June 30 this year, while it was 1.09 lakh million litre in 2016 and 3.5 lakh ml in 2015 respectively.

Meanwhile, few Mumbaikars enjoyed the weekend rain and took to social media to express their joy.

While some of them posted pictures of greenery around them, some went ahead with pics of morning cup of hot tea and coffee in the lovely weather.

Kavya Daga, a budding singer tweeted, "#Mumbai has its own way of making you fall in love with  #monsoon #baarish #Rain."

"Happieee day with Mom and Monsoon and the Marine drive.Enjoying the #MumbaiRains," said another tweet.