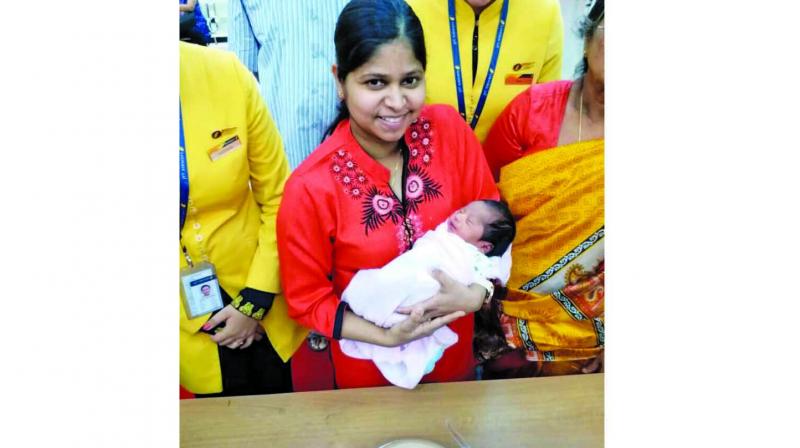 Ms C Jose with her son Jetson in her arms.

Mumbai: The first child to ever be born on board an Indian airline has been named Jetson by his mother, who flew back to Kochi with her new born on Sunday.

The baby was born on board the Jet Airways Dammam-Kochi flight on June 18 and rushed to Holy Spirit hospital in the city after the aircraft was diverted to Mumbai.

Ms C. Jose (29) and her baby, who weighed 2 kg at the time of birth, were discharged on Sunday and flew back to their hometown.

Expressing her gratitude to the Jet Airways crew members who were present at the airport to see her off, Ms Jose believes her son is special and was delivered safely only because of the care and prompt action of Jet Airways onboard crew and so decided to name her son Jetson.

Recalling the incident, one of the passengers on the same flight, said that within two hours of being airborne, the pregnant passenger started complaining of uneasiness and was unable to sit. She alerted the crew who swung into action and made an announcement for a doctor to attend to the emergency. "Only a paramedic, who was on board came forward to help and the baby was delivered near a washroom," said the passenger.  The baby was delivered within six to eight minutes.

The crew on board the flight, included two males and three females, was headed by in-flight supervisor Mohammad Taj Hayat. The other members of the crew included Tejas Chavan, Catherine Lepcha, Sushmita, David, Isha Jayakar and Deborah Tavares were all freshers and have experience of less than a year in the airline. They were felicitated by the airline for their care and prompt action.

After the pilot requested a medical emergency landing from the Mumbai Air Traffic Control (ATC), it landed within 30 minutes. "Such type of medical emergencies need extreme alertness and a lot of team effort to ensure the passenger is given best possible treatment. Co-ordination between the pilot, the ground staff, the airline staff and medical authorities is very important," said an aviation expert.

According to rules, any women who is more than 30 weeks pregnant needs a permission letter from her doctors, stating that she is eligible to fly. Once the pregnancy is more than 35 weeks, women are not allowed to fly in the international sector.

The Jet Airways Boeing 737 with 162 guests was diverted to Mumbai on July 18 as the woman went into premature labour.

The woman delivered the baby boy at a height of 35,000 ft. when it was over the Arabian Sea. She was rushed to a Mumbai hospital and discharged on June 24.