The problem of what to do with the demonetised notes if they were not exchanged was the question that many queued up outside raised. 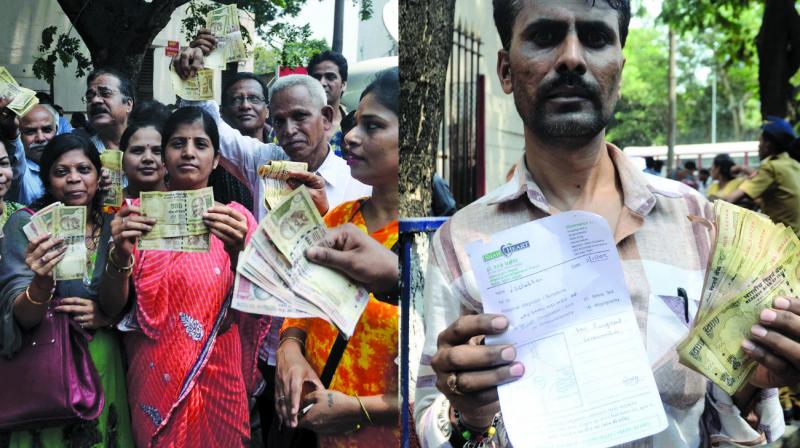 Mumbai: Chaos and confusion reigned at the headquarters of the Reserve Bank of India (RBI) on Friday morning. While it was the last day for Indians who were out of the country during the months of November and December to exchange old currency notes, most of the crowd gathered was unaware of the same and had flocked from various parts of the state and country in the hope that their notes would get exchanged. While some had brought in huge amounts like Rs 25,000 for exchanging, there were some with as few as two Rs 500 notes that they had found hidden in the cupboard.

Among them, was a man from Gujarat who said he had found Rs 26,000 inside the trunk of his recently deceased father. Ladhulal Gujjar, a tempo driver, had come from Navsari in Gujarat. “My father passed away in January due to old age and while I was going through his belongings kept in the trunk, I found the money in old Rs 500 and Rs 1,000 notes. I immediately went to our local bank but they told me that they could not do anything asked me to visit RBI in Mumbai and request them,” he said. Gujjar said he has been visiting the RBI office continuously for a week. “They ask me if I have a passport and if I was travelling out of the country. I don’t understand these questions, this is my father’s hard earned money which he had saved. Why shouldn’t I be able to exchange them?” he asked. Gujjar said he hoped the government looks at his medical bills, which show that he needs expensive medicines for his heart ailment and lets him exchange the notes.

For Sriram Lotankar (name changed) a fire brigade official in the city, possessing Rs 11,000 belonging to his bed ridden nephew poses a different dilemma. “I am a government officer and if by chance someone comes to know that I have so much money in the scrapped notes, then I will be in trouble. But I have still come here for the sake of my nephew,” he said. His nephew, back in Kolhapur had saved up `11,000 after having been diagnosed with cancer last year. “He had kept the money hidden in case there was no money to conduct his funeral. When I visited him recently, he showed it to me as his condition was deteriorating and that’s when I told him the notes had been scrapped. He was shocked,” he said.

The problem of what to do with the demonetised notes if they were not exchanged was the question that many queued up outside raised. “I think I will frame it and keep it as a show piece. Because that’s all it is now, a decorative piece of paper which was once my hard earned money,” said Madhavi Mungekar from Mulund, who said she had found Rs 5,000 that she had kept hidden some months ago to save it from her alcoholic husband.

For 76-year-old Minoo Makhania, the answer was simple. “If the notes have been scrapped then what is this extension for people travelling and NRIs, etc? Do they earn different money than us? Aren’t we all Indian citizens?” he asked.