Parents struggle for birth proof of baby born on train

This left her husband with no other option but to board a local train with her and head towards a hospital in Mumbai Central. 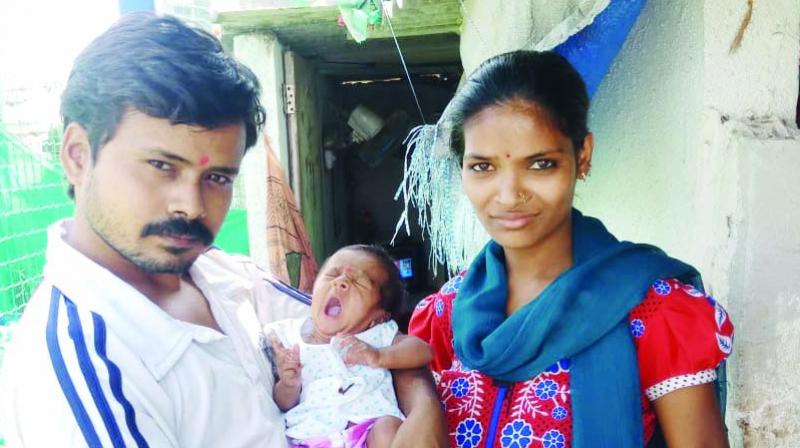 Mumbai: Four months after she became a victim of unethical medical conduct and ended up giving birth inside the general compartment of a local train, 26-year-old Surekha Tiwari, along with her husband Sushil (32), are now running from pillar to post to get a birth certificate for their baby girl, Aarti.

After going into labour in the early hours of October 25, 2018, Surekha was refused admission in two healthcare facilities including the Mira-Bhayandar Municipal Corporation (MBMC)-run Pandit Bhimsen Joshi Hospital (Tembha) in Bhayandar and Shatabdi Hospital in Kandivali.

This left her husband with no other option but to board a local train with her and head towards a hospital in Mumbai Central.

Surekha delivered a baby girl inside the compartment when the train was approaching Dadar station. With the help of Railway Police Force (RPF) personnel, Sushil rushed his profusely bleeding wife to KEM hospital, where doctors cut the umbilical cord of the extremely underweight newborn and admitted her to the Intensive Care Unit.

While Aarti’s health is slowly inching towards normalcy, the ordeal of her poor parents has not ended, as they are still running from pillar to post to get her much needed birth certificate.

“Since Aarti was born in transit, hospital authorities at Tembha and KEM have expressed their inability to issue her birth certificate. I don’t know what to do. I have already exhausted all my savings and cannot afford to take leaves from work,” said Sushil, a tribal who works as a domestic cook at a household in Bhayandar.