Police to zero in on 3 servicemen after Army investigation

The police will make around 100 students witnesses in its case against the accused. 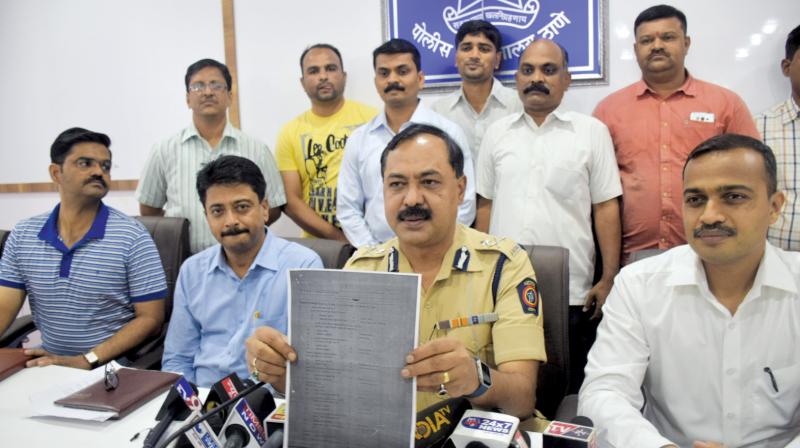 Cops show a copy of the leaked paper in Thane. (Photo: Deepak Kurkunde)

Mumbai: The Thane police has informed Army authorities about the role of three Army officials in leaking the question paper meant for Sunday’s army recruitment test.

The police has arrested 21 persons in the case, 18 of whom are connected to eight coaching centres that took money from aspirants to sell them leaked questions. Of the accused, two are former Army officials and one is a homeguard official.

Based on the alert given to the Army by the police, the former is likely to conduct its own probe against the trio.

Once the army completes its inquiry, the police is likely to arrest them. The police will make around 100 students witnesses in its case against the accused.

The three Army officials who are involved in this have been identified as Dhaklu Patil, an officer from the Nagaland regiment, clerk Ravikumar and one Army recruitment officer whose name is yet to be given to the police by Army officials.

A senior official from the Thane police said, “We are providing every detail to the inquiry officer of the Army. They also confirmed to us the names of the two names of the accused, who we haven’t arrested yet. Once the Army officials  complete their own inquiry, then we will arrest the accused. A few accused themselves had given this Army recruitment exam and failed in it, after which they had thought to start coaching classes.”

The officer further added, “There are more than five wanted accused are in this case. The accused that we have arrested are not the main accused behind this scam. We are getting information about everyone who is wanted and will soon arrest them. This is the third time these accused have tried to get question papers, because in their first two attempts they failed and got some fake paper.”