After the completion of traditional rituals, the submarine was towed to the Mumbai Port Trust, for separation from the pontoon. 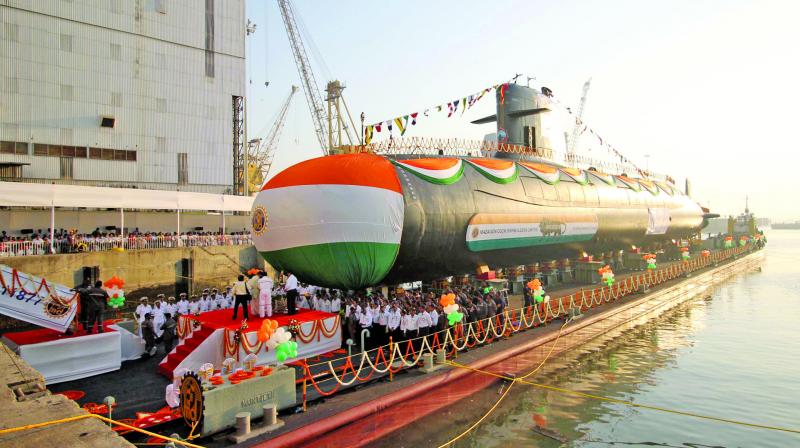 The launch of the third Scorpene class submarine.

Mumbai: The Indian Navy launched its third Scorpene class submarine on Tuesday. The submarine which was constructed by Mazagon Dock Shipbuilders Limited, has been named ‘Karanj’. The old Karanj had served the nation for 34 years from 1969 to 2003 and also seen action in the 1971 war.

Reena Lanba, President Navy Wives Welfare Association, presided over the ceremony that began with the recitation of Sanskrit shlokas from the Atharva Veda and other traditional ceremonies associated with the launch of naval platforms.

After the completion of traditional rituals, the submarine was towed to the Mumbai Port Trust, for separation from the pontoon. Karanj will now undergo rigorous trials and tests, both in harbour and at sea, before it is commissioned into the Navy.

The contract for the construction and Transfer-of-Technology for six Scorpene submarines in series, has M/s Naval Group (formerly DCNS) of France as collaborator and they are being built by MDL.