The mangrove body is going to carry out demolitions in Ghatkopar, Wadala, Charkop, Malvani among others. 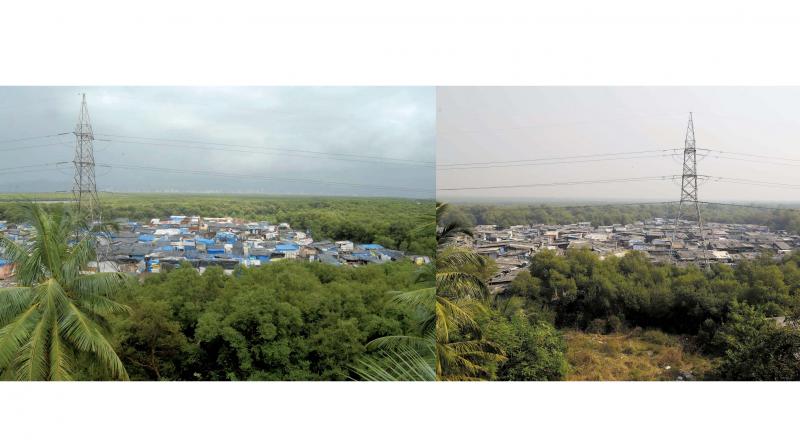 The slum encroachment in Vikhroli near Kannamwar Nagar in 2010 (left) and 2017 (right).

Mumbai: A huge patch of mangroves in Vikhroli near Kannamwar Nagar have again been encroached upon by slum dwellers. Residents have claimed that the slums at the site had been demolished in 2011, after which there has been no demolition by the civic authorities. The satellite images since 2012 reveal that slum dwellers have again encroached on around 10,000 square meters of the mangrove land over the years.

In 2011, nearly 5,000 square meters of the mangrove area was freed from encroachment. “After the demolition years ago, the Mangrove cell has not touch the site as a toddler drowned in a ditch dug by the authorities during the demolition drive. Meanwhile, the encroachment has increased over the years, threatening the mangrove land,” said Stalin Dayanand, project director of the NGO Vanashakti.

Meanwhile, the State Mangrove Cell (SMC) stated that it is going to demolish the illegal structures at the site by May 31, 2018. “ As of now, around 6,000 illegal structures have occupied mangroves in Mumbai and suburban areas, including Navi Mumbai and Thane. All the shanties will be removed by May 2018,” said Makarand Ghodke, Assistant Conservator of Forests, SMC.

Apart from the mangrove area in Kannamwar Nagar, the mangrove body is going to carry out demolitions in Ghatkopar, Wadala, Charkop, Malvani among others. According to the SMC, approximately 1,35,000 square kilometres of mangrove land in Mumbai area has been encroached upon by illegal shanties.