The accident took place immediately after the bus crossed the toll naka. 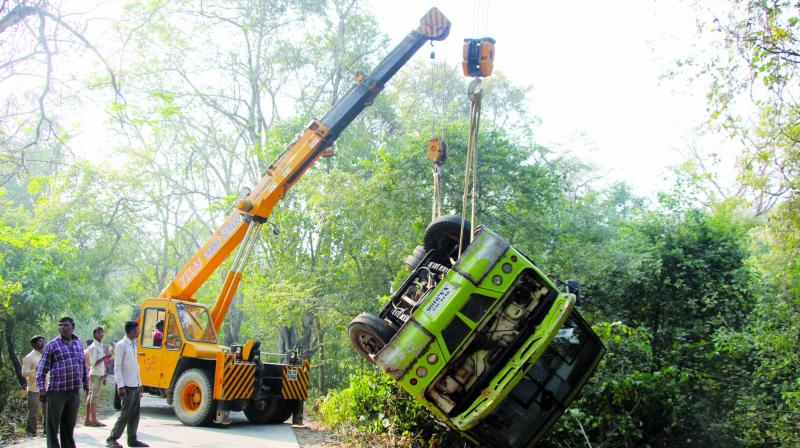 The incident has highlighted the poor condition of the buses in the park. (Photo: Mrugesh Bandiwadekar)

Mumbai: A major accident was averted in Sanjay Gandhi National Park (SGNP) around 10 am on Saturday when a bus that was climbing up a slope near Kanheri Caves started descending and toppled over due to brake failure. The accident took place immediately after the bus crossed the toll naka.

According to eyewitnesses, the bus would have fallen in a gorge were it not for a tree. Around 20 of the 31 passengers in the bus were injured. While eight of a family — one member of which is a doctor — managed on their own and left for BPT Hospital, the rest were rushed to Dr. Babasaheb Ambedkar Municipal Hospital. Most of the injured, apart from the bus attendant and a female passenger who fractured their hand and hipbone respectively, had minor injuries, and they were discharged by 2.30 pm.

The incident has highlighted the poor condition of the buses in the park. According to sources, staffers have been frequently highlighting the issue. Passengers, too, had raised similar concerns in the past. The park currently has one service for Kanheri caves, but it being a weekend and the last day of the year, the authorities on Saturday had arranged for an additional service, for the lion/tiger safari, and the safari bus was being used to ferry passengers to the caves and back.

After the accident, the department started utilising two of their patrolling vehicles. Visitors were left waiting for a ferry bus for an hour after the mishap. Ganesh Gosavi, a resident of Chembur, who was among the other park visitors waiting for the bus for an hour, said the long wait had dampened his spirits. Prajakta Jadhav, whose aunt suffered a hipbone fracture, had come to Mumbai to visit her relative in Airoli.

Ahmad Anwar, the chief conservator of forests of SGNP, said that the people were taken care off after the accident and there were no major injuries, apart from those suffered by two passengers.