There were reports of that the Sena leadership threatened to quit the government if Mr Rane was allowed to join the Cabinet. 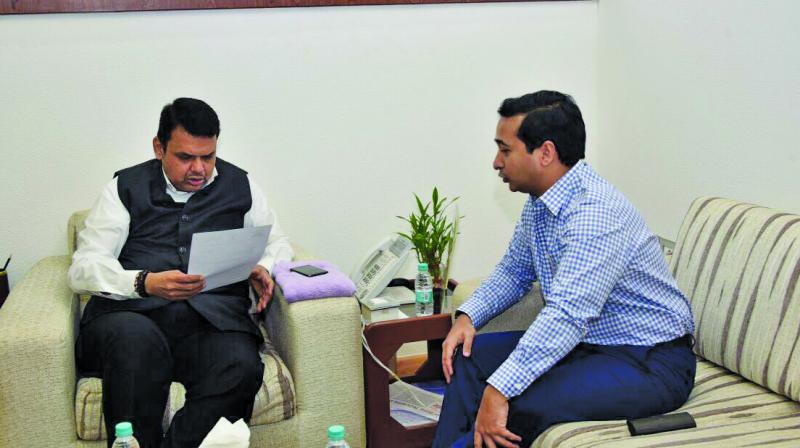 Nitesh Rane talking to CM at his residence.

Mumbai: Congress MLA Nitesh Rane met chief minister Devendra Fadnavis in Mumbai on Monday, ahead of a possible reshuffle in the Maharashtra Cabinet. The MLA’s father, Narayan Rane, recently quit the Congress to launch his own party, which is a part of the National Democratic Alliance (NDA). Narayan Rane is now set to join Mr Fadnavis Cabinet.

After the meeting, Nitesh Rane tweeted that he had met the chief minister to request help for rice farmers whose crops were damaged due to heavy rainfall in his home district, Sindhudurg. “We had recently received heavy rains in Sindhudurg, which damaged paddy crops. Farmers are awaiting the government’s help. We demanded help and panchnamas of the farmers’ losses,” said Mr Rane, adding that Mr Fadnavis assured him of complete help.

Mr Rane’s father, a former chief minister and strong man from the Konkan, resigned from the Congress as an MLC. According to buzz, another alliance partner, Shiv Sena, is bitterly opposing Mr Rane’s entry into the Cabinet. Mr Rane was originally a Shiv Sainik and does not share a good equation with Sena leadership.

There were reports of that the Sena leadership threatened to quit the government if Mr Rane was allowed to join the Cabinet. However, the Bharatiya Janata Party is pushing for Mr Rane’s entry, according to reports. Therefore, it is being said that Nitesh Rane could have discussed this issue with the CM. But Nitesh Rane denied having any such discussion. “I went there for Sindhudurg’s welfare. There was no political discussion,” he said.