CM threatens to dismiss civic bodies if they fail to tackle disease. 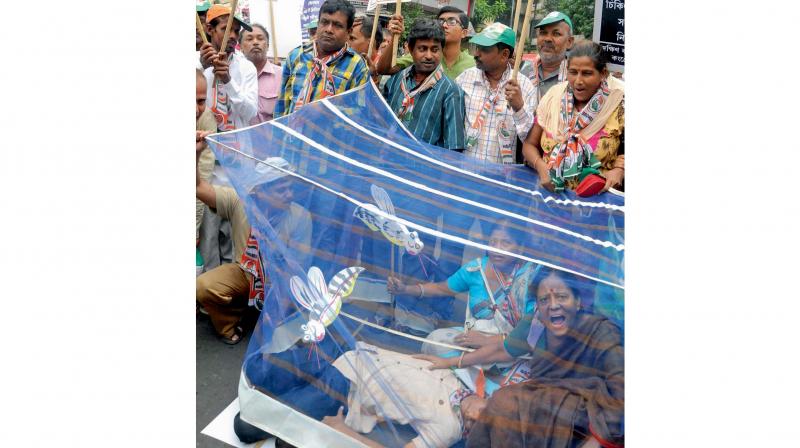 Congress workers, with mosquito nets, stage a protest against the spread of dengue in front of Kolkata Municipal Corporation headquarters in Kolkata. (Photo: Asian Age)

Kolkata: Blaming the weather for the outbreak of dengue, chief minister Mamata Banerjee on Monday assured that her government will take steps to combat the disease. She informed that funds have been sanctioned to all the civic bodies to tackle dengue.

Stung by the Opposition’s attack on her government, Ms Banerjee, who is also the health minister, even threatened to dismiss the civic bodies if they fail to spend the fund to tackle the disease.

Her warning came following her high-level meeting at Nabanna, the state secretariat, within few hours after state Congress president Adhir Chowdhury declared dragging her government to the court accusing it of failure to tackle the menace.

The chief minister, however, claimed that rumours were spread in name of dengue.

According to her, only 13 persons have died due to dengue in the state-run hospitals so far.

Ms Banerjee said, “We have sounded an alert to all the municipalities. We are conducting special drives in Bongaon, Dum Dum, Bidhannagar and Khardah sub-divisions in North 24 Parganas, two blocks at Bhangar in South 24 Parganas, some blocks in Malda, Jalpaiguri and Nadia.”

She mentioned, “Panchayat and municipal departments have been asked to coordinate with the health department to take strong measures to kill mosquitoes. State health department is providing funds. If any municipality does not do its work and fails to spend the money, it will be abolished.”

Ms Banerjee, however, added, “There is no reason to panic. Since rain occurred recently, there has been a fluctuation in weather. Meanwhile, dengue’s character has also changed. Still, I feel any death is sad. No one should die of any disease. We are taking steps to curb dengue.”

She continued, “Health is a state subject. We need cooperation from all. We are also urging the people to be aware and clean stagnant water at their home and surrounding areas.”

The chief minister also accused private laboratories of providing false information. “We have cancelled the licences of three such,” she said.

Hours before Ms Banerjee’s press meet, the Congress activists demonstrated near Kolkata Municipal Corporation (KMC). The BJP activists also held protests outside four borough offices of the KMC. At Berhampore Mr Chowdhury said, “We are going to file a public interest litigation at the Calcutta high court soon against the state government on its cover-up on dengue deaths. On November 2, a deputation will be submitted to governor Keshari Nath Tripathi. Next day a rally will be taken out in Kolkata on the government’s failure to curb dengue.”