The police tried to convince the GJM supporters to refrain from attacking, but the agitators remained defiant and broke the first two barricades. 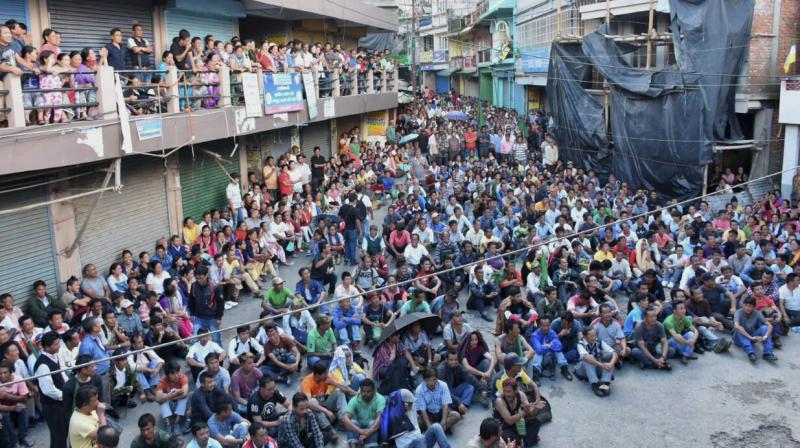 Gorkhaland supporters take part in a mass rally in Mirik in Darjeeling on Sunday. (Photo: PTI)

Darjeeling/Alipurduar: Clashes between the police and Gorkhaland supporters on Sunday resulted in injuries to several persons on both sides at Jaigoan in Alipurduar district, bordering Bhutan.

The Gorkha Janmukti Morcha (GJM) and the other Hill parties took out a rally at Jaigaon on the 46th day of an indefinite strike called by the GJM in the Hills. According to the police, clashes broke out between the security men and the Gorkhaland supporters after the participants in the rally, carrying kukris (Gorkha knives), hurled stones and petrol bombs at the police personnel.

The police tried to convince the GJM supporters to refrain from attacking, but the agitators remained defiant and broke the first two barricades. They kept hurling stones at the police, who then resorted to using water cannons and firing tear gas shells, besides using batons to disperse the crowd. At this, the protesters turned violent and set a few vehicles, including those of the police, afire.

Several police personnel and Gorkhaland supporters were injured in the clashes, the police said. The GJM claimed that the police resorted to indiscriminate firing. The police, however, denied the allegation.

Similar processions were taken out at Kalchini. GJM supporters took out rallies at the Chowkbazar area of the Hills, carrying black flags as a mark of protest against police action on Gorkhaland supporters.

Shouting slogans against the West Bengal government, they demanded an immediate intervention by the Centre. Gorkhaland supporters, armed with knives, swords and kukris, had tried to forcibly enter Siliguri on Saturday, demanding that the town be included into the separate state of Gorkhaland.