Villagers marched to the site of the project in Shibpur village, and demolished a portion of under-construction boundary wall. 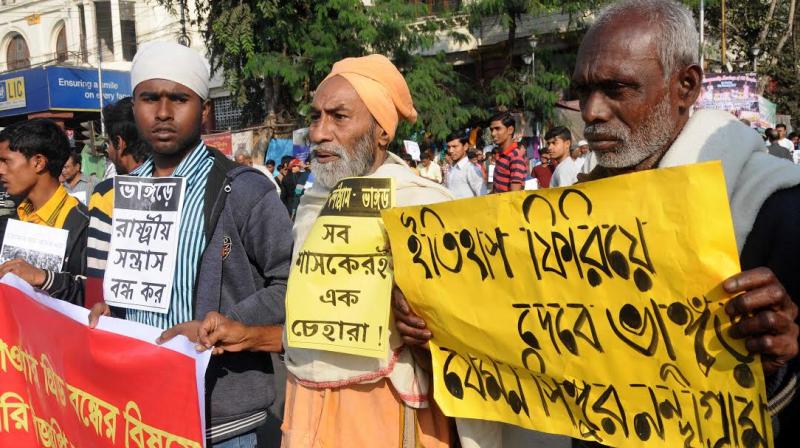 Members of Bhangar Andolan Sanhati Committee take out a rally on Monday to support the land movement and condemn the arrest of the protesters. (Photo: Asian Age)

Kolkata: After the protest over the land in Bhangar in South 24 Parganas, nearly 100 villagers staged a demonstration in Bolpur municipality of Birbhum district on Monday against the state government’s decision to set up a university there.

The villagers marched to the site of the project in Shibpur village, and demolished a portion of under-construction boundary wall. They also burnt tyres.

The villagers said that the then Buddhadeb Bhattacharjee government had acquired 300 acres of land in 2002 to build an industrial park in Bolpur, but after widespread protests over land acquisitions in Singur and Nandigram, it failed to complete the work.

When the Mamata Banerjee-led Trinamul Congress came to power in 2011, it scrapped the industrial park project, and on January 7, Ms Banerjee announced her government’s plan to set up a new university of international standards on a part of the land.

Villagers feared if the land was used for constructing a university and not an indusrial park, they would not get jobs.

“If industry is not set up here, we will not get jobs. Either the government uses the land for the purpose it was acquired or return it to us,” Sheikh Hasibuddin, one of the protesting locals, said.

The government is scheduled to build the Biswa Bangla University and the project was also considered important to chief minister Mamata Banerjee. “Biswa Bangla will be a three-minute walk from Visva-Bharati. Land has been identified for its Santiniketan-like campus,” the chief minister had announced.