The protesters turned violent and set fire to some vehicles parked nearby. 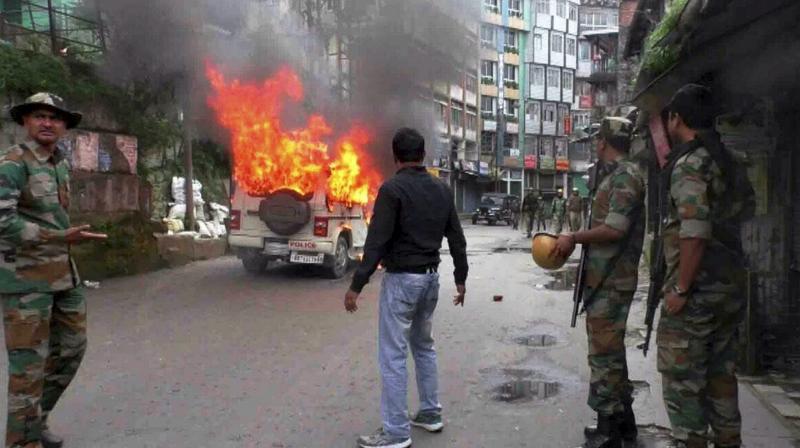 A vehicle in flames after it was set on fire by the protesters in Darjeeling. (Photo: PTI)

Darjeeling: After weeks of relative peace, violence erupted in the Darjeeling hills as pro- Gorkhaland supporters clashed with the police near Sukna area on Saturday while their indefinite strike entered the 45th day.

According to Darjeeling district administration sources, pro-Gorkhaland supporters armed with knives, swords and traditional Khukri, forcibly tried to enter Siliguri with the demand that Siliguri be included in the proposed Gorkhaland.

The police put up road blocks near the Sukna road crossing and asked them to go back. But the agitators broke the first two barricades and pelted stones at the police. The police used water cannons and mild baton charge to disperse the crowd.

The protesters turned violent and set fire to some vehicles parked nearby.

The Gorkhaland supporters are presently organising a sit-in demonstration on the Sukna-Siliguri road. The GJM leadership has claimed that the police had resorted to firing, which was denied by the district administration.

A huge contingent of police and security forces was moved to the area to control the situation. Normal life remained crippled in the Darjeeling hills due to the ongoing indefinite strike to press for a separate Gorkhaland state.