Country will be better off without BJP: Mamata Banerjee

She declared that the Trinamul would play a key role in the next Lok Sabha elections . 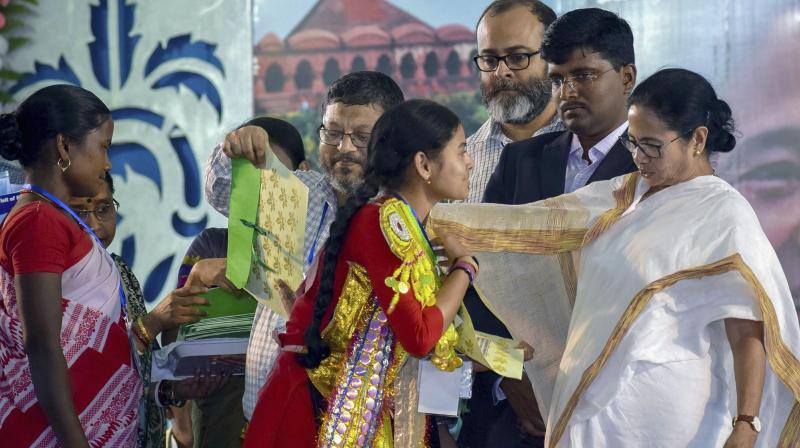 Chief minister Mamata Banerjee during a developmental programme of her government in Bankura district on Wednesday. (Photo: PTI)

Kolkata: Chief minister Mamata Banerjee on Wednesday asserted that the country would prosper with the end of the BJP rule at the Centre.

Accusing the BJP of saffronising of all important offices — from the Raj Bhavan to the Prime Minister’s office (PMO) — she also asserted that the BJP, which won two seats only in the state in 2014 Lok Sabha (LS) elections, would not get a single seat in the next LS polls.

Addressing a rally at Balarampur in Purulia, where the ruling party has faced a tough challenge from the BJP in the recent panchayat elections, the Trinamul Congress supremo said, “BJP, leave India. The country will be better off without them. From the Raj Bhavan to the PMO they have hung their signboards at all important offices.”

She declared that the Trinamul would play a key role in the next Lok Sabha elections while affirming that several opposition parties have promised her to attend the Trinamul’s grand rally at the Brigade Parade Ground on January 19 to build a platform against the BJP.

To tackle the BJP in neighbouring states also, the chief minister announced that the Trinamul would field candidates in the Lok Sabha and Assembly elections in Assam and Jharkhand which are BJP-ruled states.

She noted, “Assam has been seeing anti-Bengali movements by some sections. I want my party men to start people-to-people contact in its districts neighbouring our state. The Trinamul will also field candidates in some seats of Odisha.” Ms Banerjee stressed that her party would always support the tribal people of Jharkhand if and when they would face atrocities.

Talking about the ongoing Madhya Pradesh elections, the second phase of which was being held Wednesday, the CM said complaints of EVM glitches have affected the poll process in the central state. “The Election Commission must take responsibility to ensure that these EVM machines function properly,” Banerjee said.