Rajiv Mishra, who was caught on camera of his act in uniform, is the inspector general (Western Zone). 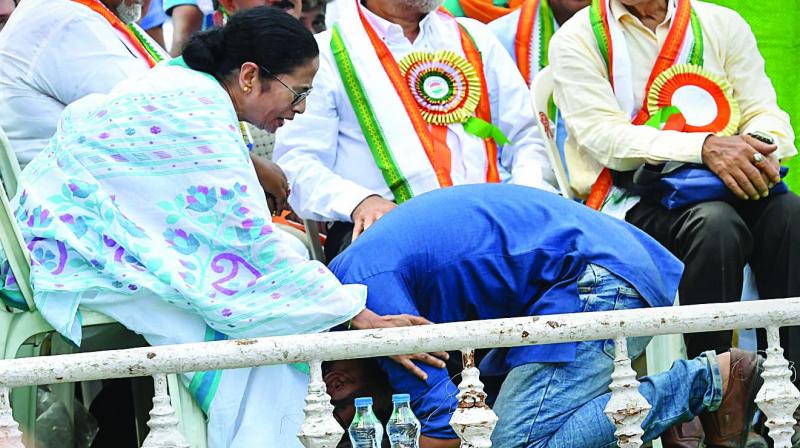 Kolkata: A senior IPS officer of the West Bengal has triggered a controversy as a video went viral showing him touching chief minister Mamata Banerjee’s feet as a mark of respect, moments after she fed him a cake with her own hand.

Rajiv Mishra, who was caught on camera of his act in uniform, is the inspector general (Western Zone). The video clip of barely few seconds, which came to light on Wednesday but is yet to be verified, is believed to have been clicked during Ms Banerjee’s tour to Digha last week. It shows her sitting with a box full of cakes with the sea beach behind her. Some Trinamul Congress leaders and senior IPS officers were standing in front of her. According to the video, Ms Banerjee offered a piece of cake to senior IPS officer Vineet Kumar Goyal.

Standing in plainclothes next to state transport minister Suvendu Adhikary, Mr Goyal, an additional director general posted as the director (Security) in charge of the CM security, had the cake as it was his birthday. Ms Banerjee then fed another piece to Mr Mishra, standing next to Mr Goyal. With the cake in his mouth, Mr Mishra is seen touching her feet with his right hand. Displaying his devotion, he then touched his forehead with his right hand. After Mr Mishra, the transport minister’s father and Trinamul MP Sisir Adhikary, also had a piece of cake from the Trinamul supremo. Tweeting the video, senior BJP leader Kailash Vijayvargiya asked, “What kind of democracy is this?”

Addressing the Trinamul Chhatra Parishad foundation day rally in the city, Ms Banerjee made passing referene about ‘fake videos.’ She also alleged how the BJP-led government at the Centre has been “terrorising” police officers in the state. Mr Mishra was not available for comments however.

It is not clear if any disciplinary action will be taken against him as many other senior officers pointed out his act a violation of the All India Service Conduct Rules. The IPS officer of the 1996-batch of the West Bengal cadre earlier served in many key positions in the Kolkata police and criminal investigation department.