Mamata Banerjee said the country was heading towards presidential form of government. 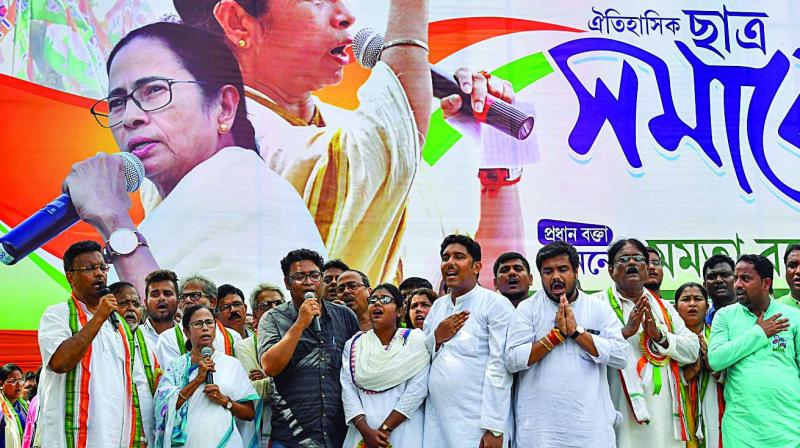 Kolkata: Trinamul Congress supremo Mamata Banerjee on Wednesday accused the Narendra Modi government of suppressing the voice of Kashmiri people with guns in the name of abrogation of Article 370 of the Constitution recently. She complained that no one is allowed to utter a single word.

Addressing Trinamul Chhatra Parishad foundation day rally, the West Bengal chief minister offered to go to even jail, but she said she would not bow to the BJP government's pressure tactics through Central agencies.

She said the country was heading towards presidential form of government. However no BJP leader came under her attack in her speech. “What is going on in Kashmir? The Central government is using brute force to supress all voices of dissent in the Valley,” Ms Banerjee alleged.

Lashing out at the BJP, she claimed, “They want Bengal because we fight and protest here. Our voice cannot be silenced. We are not afraid of agencies. Today my brother is called. Tomorrow I will be called.”

The Trinamul chief affirmed, “I am prepared for it. I am ready to go to jail. But I am not prepared to bow down to the communal politics of the BJP. I can tell you that we are gradually moving towards a presidential form of government which will have one election, one leader, one political party.”

She also slammed the substantial payout given to the Central government by the Reserve Bank of India recently.

“Some retired persons have been given jobs. They have been placed at the top of the institutions. They have no responsibility. Suddenly they order to pay `1.76 lakh crores claiming that the government is asking for funds. But whose money is it? It is people's money, country's money, money that's kept aside for emergencies. There will be no money if there is an emergency in the country today. And no one can even talk about it,” the chief minister argued.

Bantering Ms Banerjee's offer to go to jail, state BJP president Dilip Ghosh later wondered, “Others do not have this fear. They do not talk about going to jail. So why does she feel this fear? She often claims of a conspiracy of her murder. Now she is speaking of a ploy to send her to jail.”