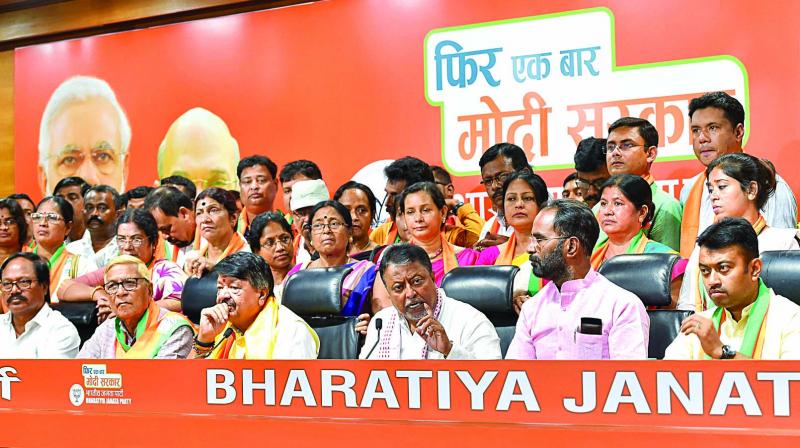 Kolkata: The TMC Tuesday likened its MLAs who have joined the BJP on Tuesday to “rats abandoning a ship sensing danger” and said people will give them a befitting reply.

Three West Bengal MLAs, including BJP leader Mukul Roy’s son Subhrangshu Roy, and over 50 municipal councillors, most of them from the Trinamul Congress, joined the BJP on Tuesday.

Subhrangshu Roy was suspended by the TMC for his “anti-party” activities after the Lok Sabha election results were announced.

A senior TMC leader said, “We will expel them from the party. Subhrangshu is already under suspension. We are not bothered about such opportunists. People will give them a befitting reply.”

“If some of the leaders join the BJP just because it has won a few seats, they are nothing, but rats who abandon a ship sensing danger. It is good that they have left our party,” senior TMC leader and minister Firhad Hakim said.

Another TMC leader Jyotipriyo Mullick said the party is looking into the development.

BJP general secretary and its in-charge for the state affairs Kailash Vijaywargiya and Mukul Roy told reporters that more MLAs from the TMC, which is headed by West Bengal chief minister Mamata Banerjee, will join the BJP in the coming days.

Mukul Roy is seen to be instrumental in engineering the defection of TMC leaders to the BJP and, political watchers believe, he is one of the key architects of the party’s best ever show in West Bengal, where Ms Banerjee has been in power since 2011.