The bench asked the state government that its priority should be protection of citizens and property. 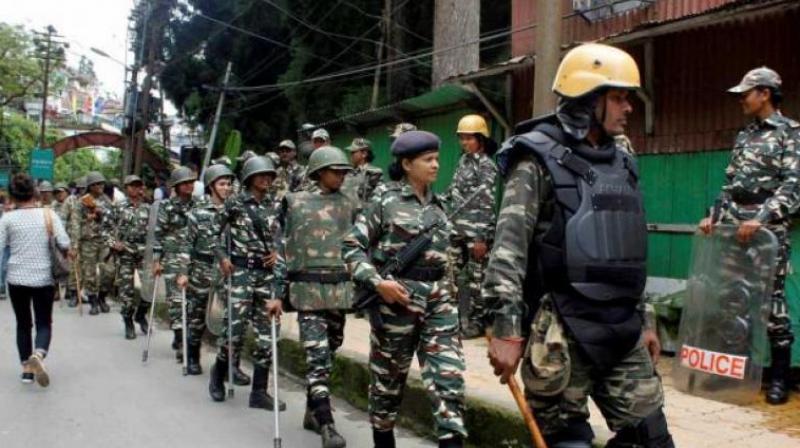 The court listed the matter for further hearing to November 27.

New Delhi: The Supreme Court on Friday permitted the Centre to withdraw seven companies of Central Armed Police Forces (CAPF) from Darjeeling and Kalimpong for election duties in poll-bound states and said it would examine the larger issue of jurisdiction of the high courts in dealing with law and order issues.

A three-judge bench of Chief Justice Dipak Misra, Justices A.M. Khanwilkar and D.Y. Chandrachud stayed all further proceedings pending in the Calcutta high court and transferred the case to itself for further directions.

The bench asked the state government that its priority should be protection of citizens and property; as law and order duty was a state subject and the government could not expect the CAPF to remain forever.

The bench passed this order on an appeal from the Centre challenging the high court order dated October 15 restraining the Centre from withdrawing the 15 companies of CAPF from the disturbed districts for deployment in Himachal Pradesh in November.

The CJI said, “We have suggested to the additional solicitor-general Maninder Singh that as an interim measure eight companies should remain in Darjeeling and Kalimpong and seven companies are to be released for election duties. He had agreed to our suggestion. This interim arrangement is subject to final adjudication by us. As we are dealing with the matter, holistically, high court should not proceed with the writ petition.”

The court listed the matter for further hearing to November 27. During the brief hearing, the CJI asked: “We want to know how many companies are there?” Mr Singh said all the 15 companies were stationed in the state. Senior advocate Rakesh Diwedi for the state pointed out that the Centre was forced to station the forces due to the orders passed by the high court. Otherwise, they would have unilaterally withdrawn from the place he said.

The CJI said the apex court would examine the large issue involved in the matter relating to law and order, jurisdiction of courts and powers of high courts to pass such a directive in matters relating to deployment of Central forces in states. The court would examine as to under what powers the high court had exercised as the country has a “unified federal structure. You (Centre and state) have a duty; the citizens are at the zenith of the pyramid, their interests have to be protected. This court has a constitutional obligation to prevent impediments to life and liberty”.

The CJI told Mr Diwedi, “Law and order is your duty. Peace must prevail. You have an obligation to maintain peace. Therefore, a balance has to be struck.” Later the court adjourned the matter to November 27.