Calcutta HC seeks details on security for May 14 panchayat polls

Petitioner raises concern over threat to personnel at booths. 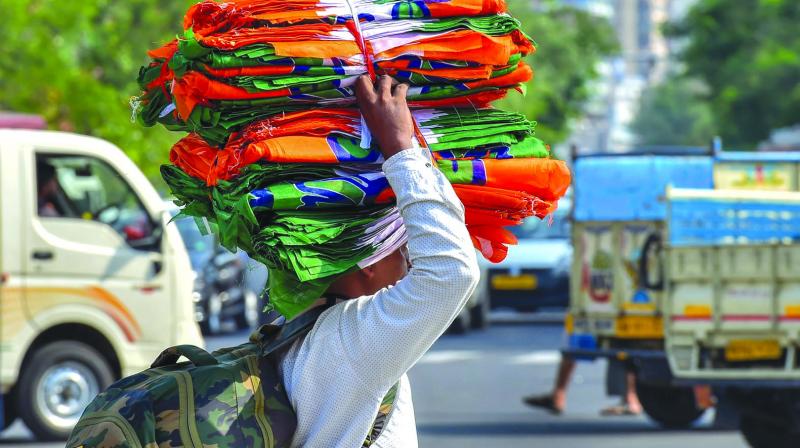 A porter carries TMC party flags ahead of the Panchayat poll elections in Kolkata on Friday. (Photo: PTI)

Kolkata: The Calcutta high court has sought a detail report from the West Bengal state election commission (WBSEC) by May 4, about the deployment of the state police personnel during the panchayat elections, a day after the state poll panel announced May 14 as the fresh date for the panchayat elections, accepting the Mamata Banerjee government’s proposal to hold the rural polls in one phase only.

A division bench of acting chief justice Jyotirmoy Bhattacharjee and justice Arijit Banerjee of the high court passed the order on Friday after hearing a public interest litigation filed by a state government employees’ forum.

Raising security concerns the body moved the high court earlier wondering about the plight of the poll personnel in face of any violence.

It also pressed for the deployment of the central para-military forces to protect the 2.92 lakh poll officials and personnel who are drawn from various departments of the state government.

According to the forum, the panchayat polls will be held in 58,000 booths while the state has the equal number of police personnel which suggests that each booth will be manned by only one cop on average.

The forum pointed out that the calculation has caused a concern for the safety among the poll personnel. It demanded that three central-paramilitary forces jawans should be deployed in each booth.

The body argued that the WBSEC was yet to declare if the family members of the poll personnel, if killed or injured while on duty, would get any financial compensation or not.

A financial assistance of `10 lakhs in case of death and `5 lakhs in case of any injury were announced on previous occasions, it added. When the division bench asked state poll panel secretary Nilanjan Shandilya if the WBSEC submitted its report on the security and forces’ deployment, he said that the state poll panel would file the report after consulting the government and all political parties.

Additional director general of police (law and order) Anuj Sharma, who was present during the hearing, informed the division bench that the state police has adequate strength.

Later, Debashish Seal, convenor of the forum, said, “The court clearly endorsed our views. It asked the WBSEC to submit a report detailing the deployment of cops in every booth and what steps it has taken to protect the poll personnel.”

He added, “The bench observed that our complaints are serious in nature. It held that we moved the court because we do not get adequate security cover.” In the afternoon state director general of police Surajit Kar Purkayastha announced of providing ‘armed coverage’ at every booth.